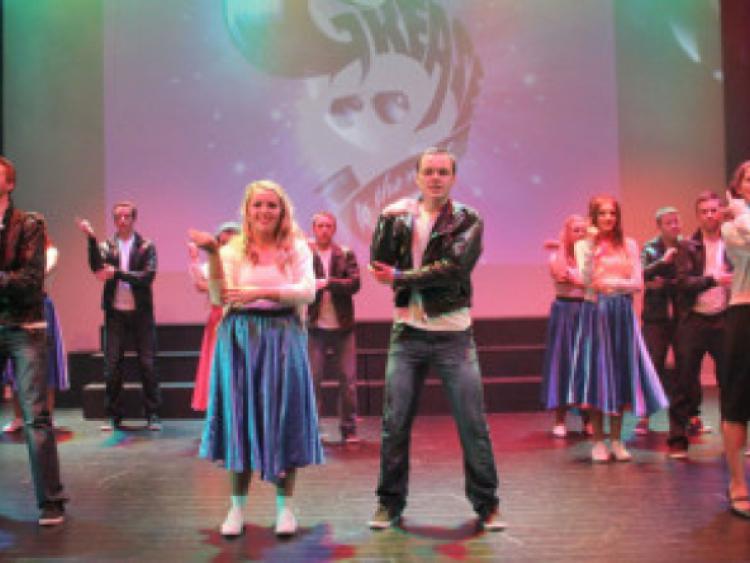 NEARLY 2,000 people packed out the Dunamaise Theatre last week and got great value for money in the process from the 89 local students who hit all the right notes during the annual Portlaoise secondary schools musical.

NEARLY 2,000 people packed out the Dunamaise Theatre last week and got great value for money in the process from the 89 local students who hit all the right notes during the annual Portlaoise secondary schools musical.

From April 16-8, the Transition Year students in St. Mary’s CBS and Scoil Chríost Rí Portlaoise were busy performing their annual musical which this year was the Rhythm of The Night.

The run, which took place in the Dunamaise Theatre, featured six shows which consisted of a morning matinee and a night show every day.

Each two hour performance was a feast of music, song and dance featuring scenes from known musicals such as Chicago, Grease, High School Musical and Camp Rock.

The students also performed their own versions of hit songs including Candy by Robbie Williams, Wings by Little Mix, Galway Girl by Mundy and Ho Hey by the Lumineers. There was also a comedy skit about the popular television show ‘Take Me Out’, which the students wrote and performed themselves.

A lot of hard work went into preparing for this year’s show. Since January the students practiced every Wednesday and Thursday during school time under the direction of the director and drama instructor Karen Hackett.

There were also numerous rehearsals during the Easter holidays, all students made the effort to attend, one student even arrived driving his tractor!

The students from both schools enjoyed the rehearsals together as it was the only chance they got to talk to each other during school hours. It didn’t take long for all students to bond which created a united spirit going into the shows in the Dunamaise.

Despite the many obstacles such as other school activities during rehearsals, the students stuck to their task in the run up to last week’s run. After a dress rehearsal on Monday the 15th in the Dunamaise and some last minute practice and changes to dances, the students, although a little nervous, were ready to perform.

The students also made the props for the show including microphone stands, steps, on stage changing area and feather fans with the help of the art and woodwork teachers.

The dry run went smoothly and gave the students the confidence to perform their next five shows over the coming days.

The pupils went from strength to strength from show to show. The crowds reacted, growing more enthusiastic with each day.

There was a great reaction to the performance of Grease Lightning and the ‘ Take Me Out’ comedy skit.

The Dunamaise was sold out for each performance, this was a great reflection on the show and was very important for the school to cover the costs of running the show such as the cost of booking the Dunamaise, costumes and Drama instructors. All who attended left with a smile on their face.

During the show the students even found time to relax by having tea and a chat in the green room and by doing each others make up, something unfamiliar to the boys on the cast but unusually comfortable on some.

The show has taken place since 2010, with each one greatly exceeding expectations and it is something both schools are very proud of.

Nothing would have been possible without the tireless work of musical director Karen Hackett and stage co-ordinator Ms Christine Kinsella, the fantastic organisational skills of both Transition Year co-ordinators; Ms Louise Gillson and Ms Anne Dollard, the constant support of principals Mr. Tony Brady and Ms Helen O’ Donnell, the dedication of teachers from both schools who willingly gave up their time, the sponsors who kindly donated spot prizes for the half-time raffles and the commitiment of the 89 members of the cast.

Everyone who watched or participated thoroughly enjoyed it and most of the Transition Year students felt that it was the most rewarding school week of their lives.

The Transition Year students had found their rhythm.