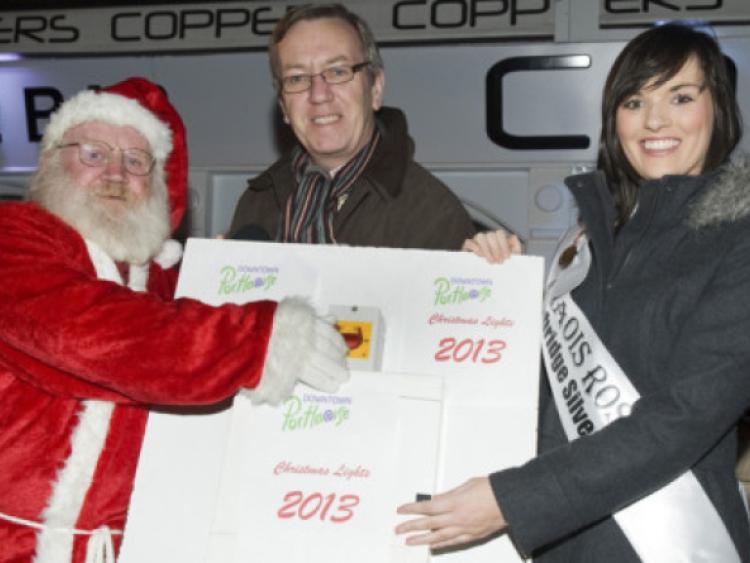 Downtown Portlaoise has big plans for the year ahead but is also happy with how 2013 ended with the Christmas market and the new lights.

“We experienced a community spirit not often captured in Portlaoise and this created a fantastic atmosphere in the town in the build up to Christmas,” said Alison Browne of the group.

She said many people helped make Christmas helped to achieve this. Portlaoise Town Council was praised for a donation to buy new lights features.

Also thanked was electrician, Tom Barron, JT Electronics, who went “beyond the call of duty both putting up the lights and taking them down and can’t be thanked enough for his dedication to the cause. Laois Hire was thanked for its equipment which saved us a lot of money.

Santa was thanked for turning on the Christmas lights. Thanks is also extened to Michael Delaney of Laois Craft, Pauline McEvoy Shimoda and Ger Walsh for their work with the market, shop windows and music in Hynds Square.

Laois County Council was praised for working with the committee in the build up to Christmas which made organisation of the market easy.

Special thanks to Pat Delaney and the council’s Environment Section for collecting our rubbish after market day with great haste. The Gardaí were also praised for their unending support especially JJ O’Connor, Gerry Dillon and Justine.

KWS were thanked providing equipment for us on market day and ‘The Square Bar’ was thanked for “free hot chocolate”.

The Leinster Express was also thanked but the committee also thanked mostly we would like to thank the people of Portlaoise for coming out to attend the turning on of the lights and market day in huge numbers.