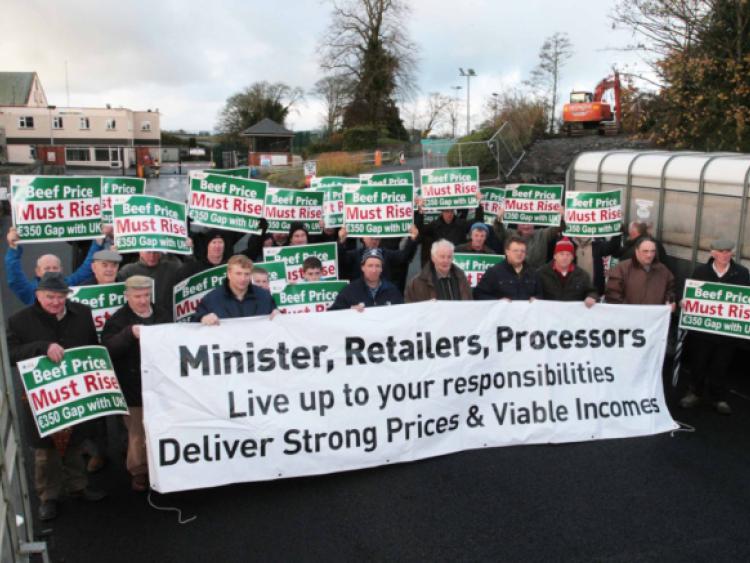 A 48-hour picket began on Monday at the Meadow Meats processing plant in Rathdowney as part of a national campaign by the IFA to tackle low beef prices.

A 48-hour picket began on Monday at the Meadow Meats processing plant in Rathdowney as part of a national campaign by the IFA to tackle low beef prices.

Henry Burns, chairman of the IFA national livestock committee, estimated that 60-70 people were on duty at Monday’s picket in Rathdowney and said their resolve was “very, very strong”.

He accused the meat factories of being “disingenuous”.

“They are not being honest about the figures. Farmers are no eejits and can look up prices on the computer and are able to compare,” he said.

Mr Burns added that they could not continue to sell cattle at a loss and said farmers had endured very low prices for a year.

He said the farming community in Laois is very much dependent on cattle and cattle finishing. “It is worth a huge amount to our rural community,” he said.

This is the second protest in Rathdowney, the first of which took place on October 27. “There was a phenomenal turnout from Laois people. We had between four and five hundred people at the start of that protest,” Mr Burns said.

“Farmers feel that they are standing up for themselves,” Mr Burns explained.

Local IFA members manned the protest through shifts throughout the 24-hour protest, in a similar fashion to the latest picket. Mr Burns estimated that approximately a quarter of all beef farmers in Laois had turned up for the first protest.

Mr Burns noted that since the beef forum in June, there had been an increase of 35p per kilo in the UK, where Ireland exports 60% of its beef, but there has been no increase for Irish farmers.

“Teagasc figures have shown that we need to be paid €4 per kilo just to break even and €4.50 per kilo to have a (profit) margin.

Meat Industry Ireland (MII) has condemned the IFA factory blockade campaign as misguided and counterproductive. The Chairman of Meat Industry Ireland Ciaran Fitzgerald said that the blockade will only disrupt business, damage Ireland’s reputation with customers and will not impact EU beef market prices.

Mr Fitzgerald said: “The price we are paying is very much market reflective and very fair.”