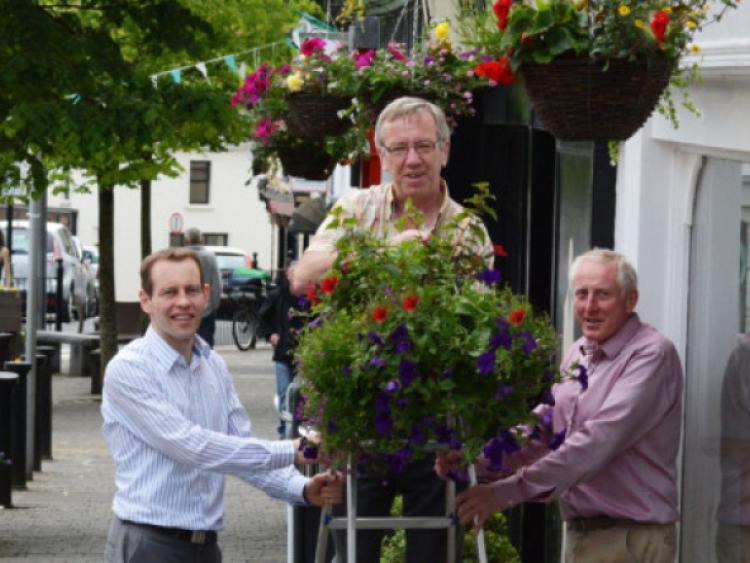 Portlaoise town centre has been transformed with 118 hanging baskets mounted outside business premises on Main Street.

Portlaoise town centre has been transformed with 118 hanging baskets mounted outside business premises on Main Street.

The undertaking is being driven by Downtown Portlaoise, the initiative set up to promote traders in Portlaoise.

“It is going great,” enthused Jack Nolan. “We had two hanging baskets last year and this year we have 118.”

Jack’s own locksmith business on Railway Street has won a business premise award for the past 5-6 years, due in no small part to the floral displays. He laughingly accepted he might be surrendering his title now that so many businesses have followed his lead.

The scheme involves local businesses paying €50 for two hanging baskets and the Downtown organisation then provides a bracket and mounts them. Sponsorship was provided through Telfords towards the cost of this. Work was also done on hanging baskets through a scheme from Portlaoise prison, managed by Gus Carr.

One of the biggest concern voices by businesses was the need to water plants daily.

Watering almost 120 hanging baskets is not a small undertaking but the Downtown group have it all in hand. Three water butts have been strategically placed around the town they can get a water supply from the local authority.

“Laois County Council has given us the use of two taps in town,” Jack said. “Martina Bracken in the council has been a great help to us to get us up and running,” he said. Premier Nurseries in Rathleague provided the plants and Jack said they were very happy with the service and deal they were given.

It is hoped that the burst of floral colour, particularly with eye-catching begonias, may inspire those who haven’t signed up yet to join in. “Some premises haven’t come on board but we hope when they see their own empty spots, they might do so,” Jack said. He added that they have also placed floral displays on vacant premises in the town to improve their appearance and Laois County Council had also placed a mural at the former Shaws shop, the site of the new county library.