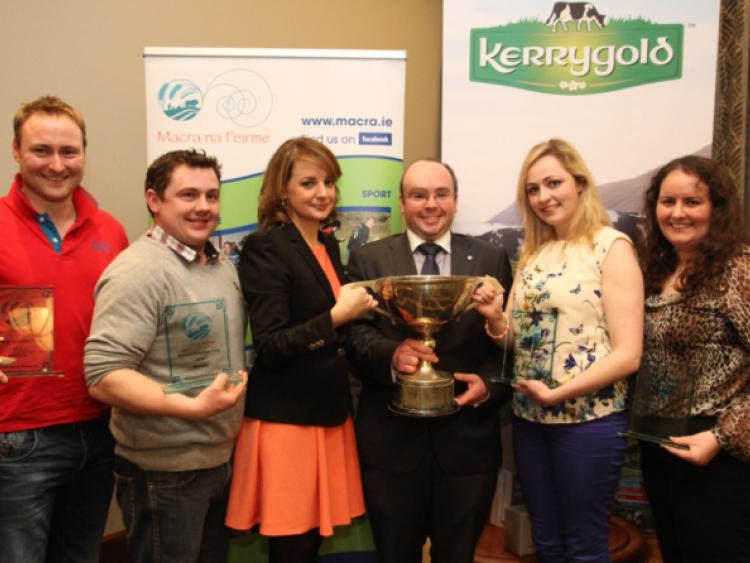 Mountmellick Macra are officially the smartest club in Ireland, after winning the Kerrygold Club Question Time quiz on Saturday March 15.

Mountmellick Macra are officially the smartest club in Ireland, after winning the Kerrygold Club Question Time quiz on Saturday March 15.

The four members who took on 37 teams from every county in Ireland, were Sharon Fitzpatrick, Shane Fitzpatrick, Norman Thompson and Gemma Goulding, who was captain.

Backed up by a crowd of energetic supporters from the busy club, they took to the road to Limerick to do their best in the national finals of the quiz in the Castletroy Hotel on March 22.

“We had our boys in the club in the All Ireland basketball final too so we had lots of support, it was a brilliant night,” said Gemma Goulding.

The purpose of the quiz is to encourage Macra members to improve their general knowledge. Two teams had progressed from each county to the national finals.

The other Laois team was Rathdowney Macra.

“There was a good mix of questions. It was taken quite seriously, our phones were taken away and put in plastic bags, and we had members of Limerick Macra patrolling the tables,” said Gemma.

The first four rounds were written tests comprising of 10 questions on a chosen topic, with each team member specialising in that topic, the only one permitted to answer.

Mountmellick’s Film and TV specialist was Sharon, Popular Music was chosen by Shane, Sport had Norman as the expert and Current Affairs was covered by Gemma.

This was followed by 6 rounds of 10 questions.

The team did Mountmellick Macra proud, coming first place scoring an amazing 80 points out of 100, second place were Kilkenny City A on 78, and 3rd place Ramor.

“We were absolutely thrilled to win. The club had won it before in the 1980’s and we were thrilled to bring the perpetual trophy back to Mountmellick again,” said Gemma.

The team also took home a handsome glass trophy each.

The club praised all the teams that took part on the night and congratulated their team on winning.

Macra na Feirme is an organisation for young people between the ages of 17 and 35 who are interested in meeting new people and getting involved in sports, travel, drama, debating, or just want to meet new people and have some fun, with hundreds of clubs across ireland.

It began in 1944 as a social network for young farmers and has since expanded to include all young people.

Anyone interested in joining Mountmellick Macra can call 087 696262 for more info.