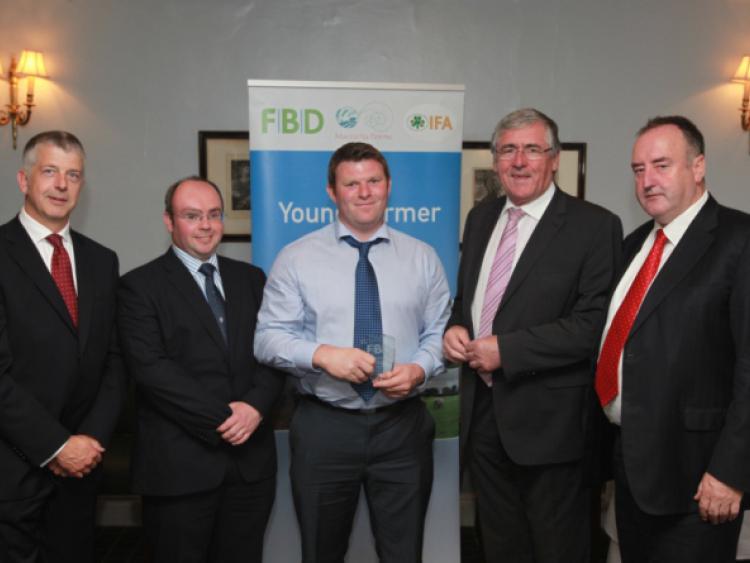 A young dairy farmer from Stradbally has collected his award at Macra na Feirme’s FBD Young Farmer of the Year competition.

A young dairy farmer from Stradbally has collected his award at Macra na Feirme’s FBD Young Farmer of the Year competition.

The aim of the competition is to recognise and reward the top young farmers in the country. Entrants are judged according to a number of criteria including farm business initiative and innovation, levels of farm efficiency and enterprise quality, farm safety and environmental protection awareness, as well as agricultural knowledge and community involvement.

Richard manages a dairy farm with a full pedigree herd. Growing his herd number along with increasing herd solids per hectare and improving fertility are some of Richard’s goals for the future but unavailable finance to facilitate this is proving to be a major problem for him.

Along with being a member of the IFA Richard is active with the Portlaoise rugby club, acting as the first team coach in 2013 and club captain in 2014. He also holds a Bachelors degree in Agricultural Science.

Macra na Feirme national president, Kieran O’Dowd, praised the young farmers who had made it through to the national final. “Macra’s FBD Young Farmer of the Year Awards showcases excellence among young, highly progressive farmers and recognises their commitment to both the agricultural industry and their local communities.

“To support young farmers the Government needs to facilitate and create the necessary supports in the current CAP and national budget process to encourage energetic and well trained young people to commence farming and support them in establishing sustainable and profitable farm businesses.

“The supports and opportunities are now available under CAP for young farmers. However, success or failure of this potential golden era for young farmers will come down to choices by the Department of Agriculture on the provision of schemes and incentives to encourage the next generation of farmer to deliver growth and expansion in the agricultural sector and contribute to economic development.”

Twenty four contestants from all over Ireland took part in the 15th FBD Young Farmer of the Year competition. The competition, run by Macra na Feirme in conjunction with the IFA, aims to recognise excellence in the agricultural industry and promote farming as a career with a bright future.