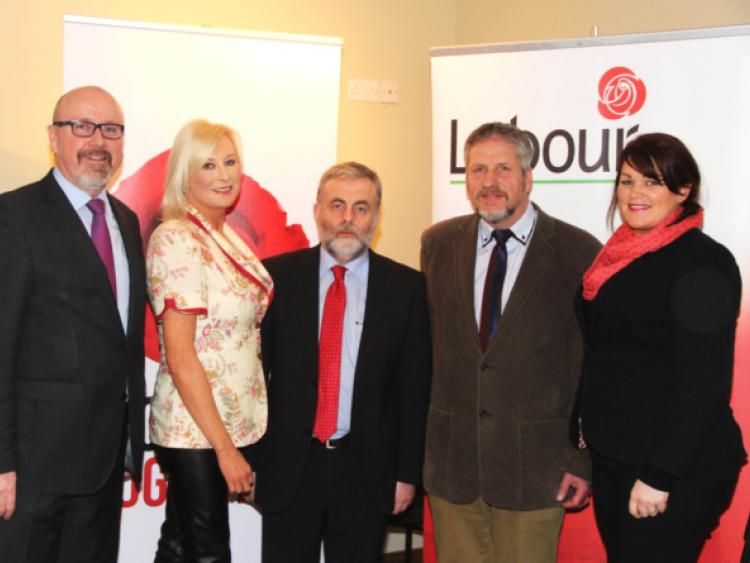 In an impassioned address at the launch of Portlaoise Labour candidate, Noel Tuohy’s official launch on Friday night, the trade union leader urged the electorate to back the three Laois Labour candidates, Cllr Lisa Delaney, Grainne Corcoran and Noel Tuohy. “Vote for them, not for their sake, not for Labour’s sake but for your own sake and to protect your families, public services and small businesses.”

The SIPTU chief could not understand those who would set out “to give Labour a kicking” in the elections.

“Labour is punching way above its weight in Government to protect workers, families, standards of living, frontline services, public services and the public ownership of critical utilities and State companies such as the ESB,” he stated.

Portlaoise James Connolly Labour Branch Chairman, John O’Mahoney told the upwards of 200 family, friends and supporters at the launch in Hume’s function room that there was no better colleague or candidate than Noel Tuohy.

Sen John Whelan said he was confident that Noel Tuohy would be elected; but it wouldn’t happen by just wishing for it. “If everyone here tonight goes out and secures 10 votes each for Noel, then he will be elected, otherwise there is no point in going around and crying about it afterwards, as Noel would make an outstanding councillor for his entire community.”

Noel Tuohy thanked his wife Marie and family for all their support and encouragement. He said he was not setting out to become a politician but rather to continue on the 35 years he had committed to public service, in his work as a prison officer, as a trade union official in the POA and in a variety of community endeavours and campaigns.

He took no one’s vote for granted and would try to earn it. His roots in Portlaoise run deep as his granny, Hannah Moylan, was born in Lyster Lane in 1903, and her mother too hailed from the Town.

He commended Labour stalwarts who had kept the flag flying down the years, such as Tom Phelan, Sean O’Gorman, Joe Grennan and Joe Murphy, when it wasn’t easy to do so.

“In times of trouble we turn to Labour and then we turn on them and tend to blame them, but we always know we can trust them to put people first. In all the years they have never been dragged before the tribunals”.

Before concluding he called for an expression of sympathy with the Dooley and Norton families on their bereavements.