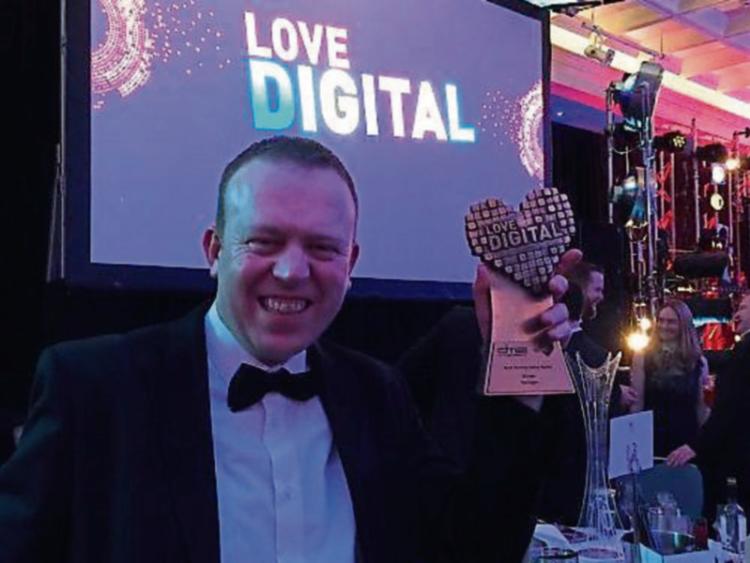 Rory McEvoy, founder of Twiznight, flies the flag for Laois this week at the National Enterprise Awards this Thursday, June 9 as a result of winning the overall award in the Laois County Enterprise Awards, 2016 for the success achieved with his firm Twiznight.

Twiznight is described as a “unique, cost effective, intereactive, marketing tool in the form of a brand sponsored Twitter Quiz which enables consumer engagement and a huge twitter reach”.

“It quite literally started with a tweet,” said Mr McEvoy ahead fo the awards.

“ I randomly asked a question about a 1990’s game show called the Crystal Maze. I soon found out due to the response that there was a real appetite for quizzes on twitter and within 3 weeks I had my first paying customer,” he said.

Starting any business is not easy and this was no differant for Mr McEvoy who had to make a big choice.

“This was very difficult, as I was working full time as an accountant for United Drug, in a demanding role. First thing I did was register the domain name and trade mark to protect the brand as much as I could. I validated that there was a desire for such a product in the market.

“Once I was sure of this, I decided to leave my job and dedicate myself full time to this venture,” he said.

Going out on his own in business was, in some ways, the result of another ambition.

“I always wanted to create something new, come up with a new product that didn’t exist before and for it to become something that people recognize,” he said.

While the end rewards can be worthwhile, starting out in business presents many challenges especially on the money front.

“The financial stress has been my greatest struggle, after working for almost 20 years with a guaranteed salary coming in every month. I’ve sacrificed earnings, security, and ability to take holidays, all in the hope and belief that my business will take off and be very successful,” he said.

If the ambition not being primarily to0 go it alone in business, Mr McEvoy's proudest achievement has not been the bottom line. Instead he points to recognition from others when speaking about fulfillment.

“My proudest moment to date has probably been winning a Digital Media Award less than six months after leaving my job where I had worked for almost eigh years.

“This market validation filled me with great confidence and pride in what I had achieved,” he said.

For a man who sees the bigger picture and has had career experience beyond in his own business, he still finds work life balance hard to achieve. He is married to Mary and has two young children.

“This is difficult, as it’s very hard to switch off. For me, I no longer spend over two hours a day commuting to and from work. I get to bring my son to playschool and be around more for my family. My Smartphone means I’m always connected and can move things along quickly.

“I do my very best to keep my weekends for family time and try not to let work creep in but sometimes it has to,” he said.

As to the enjoyment he gets from being an entrepeneur he returns again to a non-financial return.

“It has to be creating something brand new that didn’t exist before I developed it. I have seen my tiny idea come to life and expand into areas I never thought possible in such a short period of time.

“There is a huge sense of achievement when you’ve crossed another hurdle, be it getting financing, investment, a product launch or new clients on board etc. It is great being the boss of everything and developing new skills that I didn’t have before.

“I’ve been lucky enough to win a Digital Media Award, be a finalist in the Bank of Ireland Start-up of the Year and now a winner in the National Enterprise Awards,” he said.

So, what does the future hold for his fledgling firm?

“The future plans for Twiznight are to successfully launch the product into the UK and beyond. I plan to expand the quizzes into other social media platforms such as Instagram and Facebook, resulting in a cross social media engagement platform.

“The ultimate goal is to have hundreds of leading brands embedding our quiz platform into their websites,” he said.

But it also started locally thanks to the Laois Local Enterprise Office.

“The LEO was incredibly supportive, in terms of advice and financial assistance and has funded my business to almost €40,000.

“This enabled me to completely redevelop my product into a white-labeled engagement product that any brand in the world can now use. The LEO has helped push my presence into the Europe market, through the Enterprise Europe Network (EEN),” he said.

So, having been through the process of going out on his own and reaping the rewards, has Mr McEvoy some tips for anyone starting their own business?

“It’s all about survival. Do everything you have to do to stay afloat. Manage that and your business has a real chance.

“Mind yourself and try and not let the stress get to you. Have a supportive network around you. Reach out to the LEOS, Enterprise Ireland and the banks. Above everything else sell, sell, sell!”