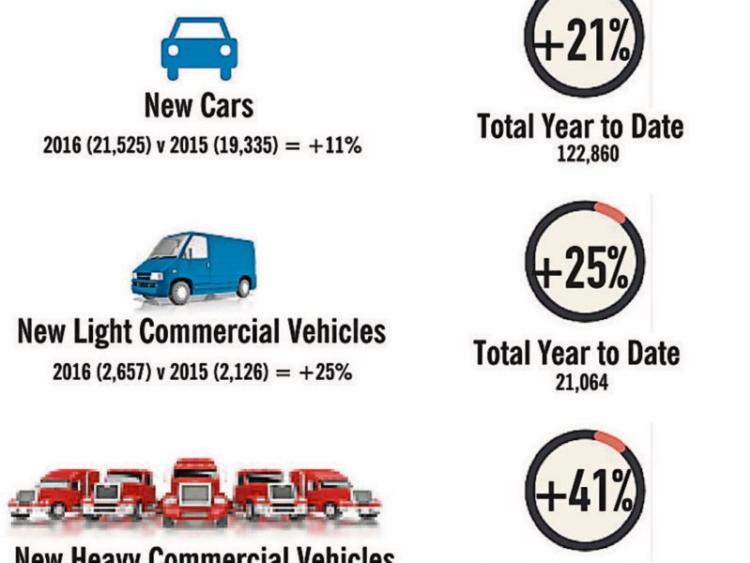 The latest Society of the Irish Motor Industry (SIMI) SIMI/DoneDeal report highlights the strong performance that the Motor Industry has made in the first half of 2016 and but there has been a warning about sales next year.

Jim Power Economist and author of the SIMI/DoneDeal Report said: “Despite the still-positive economic outlook, growth in car sales could be low or maybe even flat in 2017. This slowdown in growth reflects a market approaching, but still lower, than its natural state, after a prolonged period of catch up, but one that is now shrouded in Brexit uncertainty.”

The review also highlights that the cost of motoring in general has decreased with the price of new cars down on average 3%, Petrol prices have declined by 8.4% and Diesel prices also declined by 12.4% in contrast the cost of motor insurance is increasing at a significant pace have again increased by 38.6% in the first quarter of 2016. SIMI has raised the issue of rising insurance costs which are impacting most on younger drivers and those driving older cars.

Alan Greene SIMI President highlighted: “In the first 6 months of 2016, 32,285 used cars were imported but we have seen research quoted in the media that among these cars have been a significant number that should never be allowed on the road here. It is totally unacceptable that dangerously unsafe cars written-off and removed from the road in another jurisdiction can be registered and put back into service here. We also have cars written off here, which have no record of their unsafe status recorded on the NVDF to protect future buyers and other road users.SIMI has been pressing for action on these issues for far too long and it is vital that these problems are dealt with without any further delay. We understand that proposals on write-offs are before the Cabinet and we urge the Minister to take immediate action. A statutory requirement to record all write-offs and details of seriously damaged vehicles on the NVDF together with a prohibition on registering unsafe vehicles that have been previously written-off in another country will save lives on our roads and will protect consumers.

The soaring cost of insurance, especially for young people or for those driving older cars is also a serious concern.

The proposed action on write-offs may also help in this regard but more than that is needed to reduce the cost of motor insurance. We believe it’s time for the Government to establish a strong review of the causes of the current high cost of insurance, similar to the Motor Insurance Advisory board that successfully achieved significant insurance cost reductions during the late 1990’s. There is a real danger that without such action we will see an increase in the number of uninsured drivers as was the case previously when insurance costs were unacceptably high.”

Figures from DoneDeal mirrored the growth rate with car Dealership advertising increasing by 19% in the first half of the year.

The key drivers of new car sales are being driven by the sustained economic recovery, strong growth in employment, personal disposable incomes, modest reduction in personal tax burden and the availability of car finance.