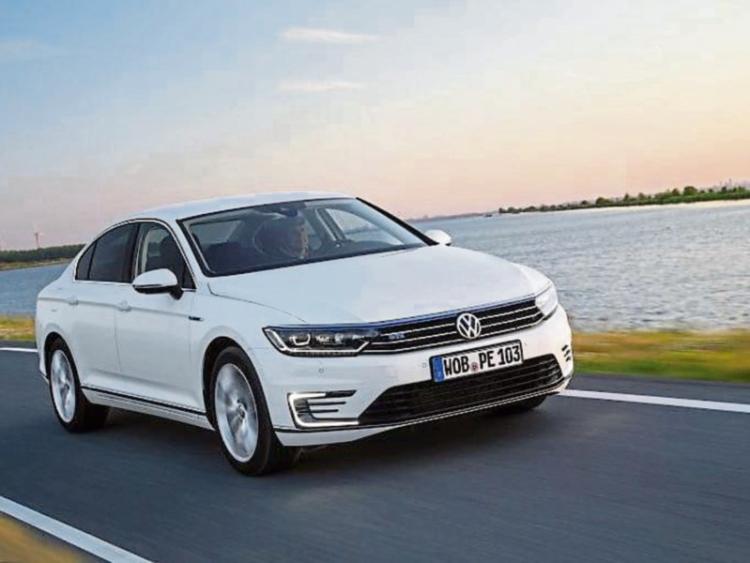 VW have made a clear commitment to developing fully electric vehicles for everyday use.

However they are not there yet and so we have cars that attempt to offer a bit of both, electric, and petrol and so it is with the new Passat GTE. So what is it? A Passat yes but offering a little bit of everything for the emission conscious buyer. Its a Plug-in Hybrid, its an electric car and its got a 1.4 litre TFSI petrol engine.

Here’s the idea! The petrol engine does away with the “range anxiety” issue of current pure electric cars. The new VW Passat GTE boasts battery power for zero emission motoring.

The battery can be charged by plugging the car into the domestic electricity supply or a defined charging station, or by the 154 bhp 1.4 TFSi engine as you drive. The battery and the engine also offer a combined power output of 215 bhp in GTE mode. Three modes, E, Petrol or GTE.

It is a smart tidy looking 3-box saloon. The casual observer will not notice any difference to the “normal”car. The more observant will spot the new curved LEDs up front and the discreet blue trim line around the front grill. I must say its a classy looking machine.

The interior of the Passat GTE is well designed and nicely laid out. The driving position is pretty much perfect, the seats are excellent and all switches and levers fall easily to hand.

The is an air of Teutonic efficiency about the whole car. What it may lack in flair it more than makes up for in functionality and it all feels upmarket.

Driving the new Passat GTE is in many ways simplicity itself. You can ignore the plug-in element altogether and let the car switch automatically between petrol or electric power or both for full boost acceleration. Select E-Mode and if there is charge in the battery it runs silently on electric power only for up to 35 km at up to 140km/h.

To give a practical example. I left Naas in Co Kildare for a day of Christmas shopping with the family in Dublin. The battery had only 25% charge when we left Naas. By the time we got to the outskirts of Dublin under petrol power it was almost 90% charged (by the engine) and showed an electric range of 30km. So I selected E mode and we drove from outside Dublin to the city centre and back to the Kildare borders on electric power only at which point the battery was empty and the car seamlessly switched to petrol power. So it really works in a practical sense. When parked up you can of course plug-in the car to recharge the batteries as there is a small fuel penalty if using the petrol engine to do that job. The GTE button promises both petrol and electric motors for the full power output of 215bhp.

The new Passat GTE rides and handles very well indeed. The suspension does a good job of soaking up road imperfections and refinement levels are good.

Accomadation is equally good. I am about 6 feet tall and had no trouble sitting comfortably behind where I would have the drivers seat were I driving. The boot is slightly smaller than the standard Passat due to the batteries beneath but still a good size.

Therefore the claimed cheaper running costs of the GTE hybrid are far out weighted by the premium price tag. Pity really because it works!