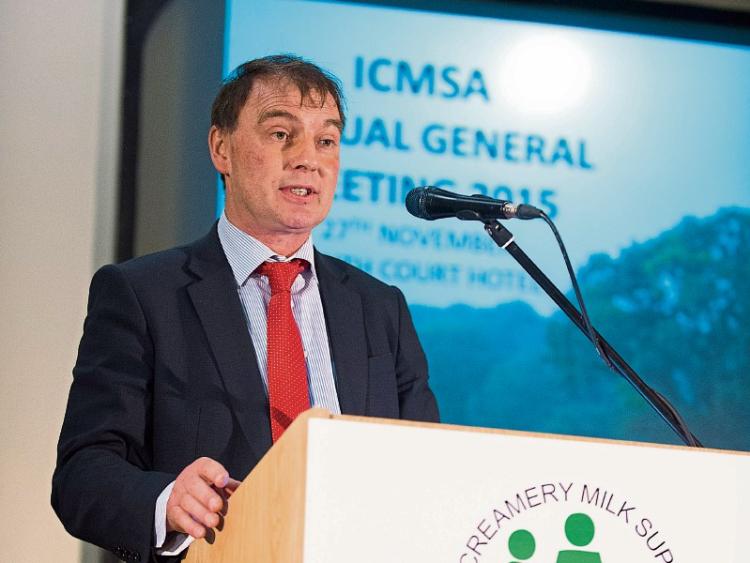 Some 300 farmer delegates gathered in the Castletroy Park Hotel for the Annual General Meeting of the specialist dairy farmers’ organisation, the 16,000 member strong, ICMSA.

Mr Comer told the delegates that the preservation of our food exports to the UK on a tariff-free basis must be our guiding principle right throughout the Brexit negotiations expected to begin early next year.

He noted that Ireland’s food trade with the UK was centuries old and currently valued at just short of €5 billion per annum and told the attendance that it was impossible to over-state the dangers presented to our ‘Flagship’ food sector’s exports to the UK by a new system of tariffs, customs-clearance and the persistence of Sterling devaluation relative to the Euro.

Mr Comer told the AGM that Ireland could not “stand idly by” while decisions that went to the very core of our State’s economic prospects were debated without reference to the critical importance and ancient commercial ties between Irish food production and their UK markets.

Ireland must be cognisant of others’ positions but, he said, but if there was ever a time and occasion when we must leave no doubt about our intention to defend our national interests, then it was surely this.

The ICMSA President said that the huge swathes of rural Ireland more or less completely dependent on farming and food production and needed to know that our Government would be setting out the preservation of Ireland’s current access to the UK food market as a national strategic imperative on which Ireland could not - and would not – concede.

He told Minster Creed that this reality needed to be communicated to the Commission and other Member States “Early and Often”.

The Minister, for his part, spoke about the general situation and fielded many questions about the prospects for some stability and recovery in milk price as well as numerous attacks on the hugely disliked QPS Beef Grid – a pricing system operated by the meat factories that is the subject of much mistrust and resentment on the part of the majority of farmers.

ICMSA has recently published figures that show a ‘disappearance’ of some €80 million from farmer beef price since the grid was introduced and speaker after speaker called for the Minister to follow through on a commitment to review the Grid given by his predecessor at the Beef Forum held over two years ago.

Mr Bruton’s account of the likely progress, direction and pace of the Brexit talks was masterful and anyone who heard it is immeasurably better informed now than before.

The former Taoiseach and EU Ambassador to the US laid out clearly where the negotiating quicksand was and made it abundantly clear that we must be thinking in terms of, perhaps, 20 years before a final position can be achieved.

Nor was he any less vague about where blame should be apportioned for the chaos that must ensue.

He described as “undemocratic” several conclusions that the UK Government had drawn from the Referendum decision without, in his opinion, sufficient evidence that that was what was intended.