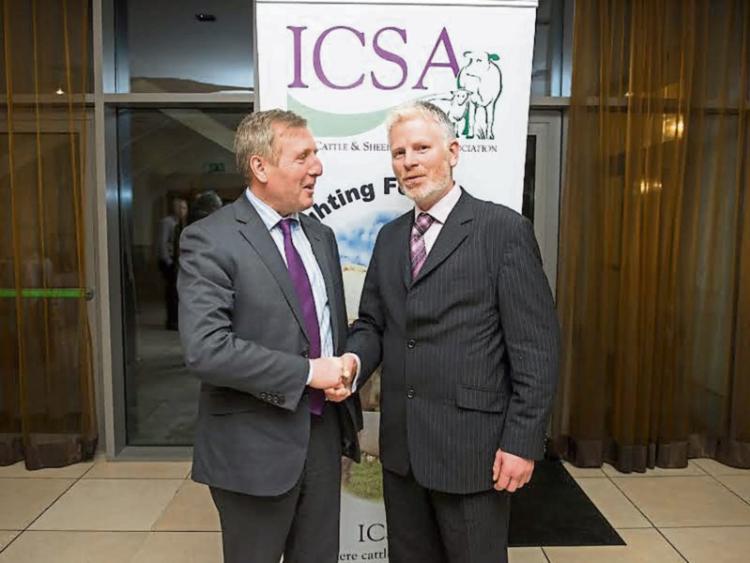 CSA national president Patrick Kent has said “Expanding production is a highly risky strategy in the midst of Brexit uncertainty, dismal farm incomes and the threat of looming trade deals.”

Mr Kent was addressing Minister Michael Creed and members of the ICSA National Executive at the ICSA AGM and Annual Conference which took place in Portlaoise last Thursday evening.

Agriculture in a Post Brexit World formed the theme of the conference and Mr Kent outlined the association’s key requirements from the government on its approach to Brexit.

He stressed the importance of continued tariff free trade between the UK and Ireland due to our unique ties in the agri-food sector and to the mutual benefits accruing.

He said this mutual link must be maintained in an effort to dissuade the UK from looking to South America and New Zealand for beef and sheepmeat imports which Ireland currently supplies and relies heavily on.

Mr Kent said in light of Brexit uncertainty and the threat of further EU trade deals following CETA farmers are simply producing too much beef.

“Basic economics tells us what happens when supply is too high for demand.”

Mr Kent called for a complete review of Food Wise 2025 which he said “could potentially bankrupt farmers if we believe that expansion of production will make us better off.”

The president then outlined ICSA’s proposal to reduce numbers in the suckler cow herd.

He said unlike others who proposed a now dismissed €200m scheme, ICSA proposes to reduce the number of suckler calves born by 20% for one fifth of the cost, at €40m.

He also slammed meat sector proposals to encourage one million extra lambs which would only collapse price.

He took exception to the culture of treating farmers like uneducated peasants expected to work 90% harder for no extra gain if Food Wise 2025 targets of increasing exports from €10 billion to €19 billion are to be achieved.

Addressing the issue of CAP reform Mr Kent said “Simplification should mean paying farmers on time. EU rules which prevent thousands of farmers being paid their first instalment of their BPS every year must be changed.”

He also insisted that the UK exit from the EU must not leave a shortfall but rather be made up of EU member states making up the difference to retain current budgeting levels.

Mr Kent also questioned whether CAP alone can pay for climate change measures and restrictions, adding that contrary soundings from Brussels only added to confusion.

Mr Kent slammed the U-turn on biofuels by the EU which is bad for cereal farmers but also for livestock farmers who need EU grown GM free quality protein which is a by-product of biofuels. It also strikes a blow to any chance of reviving the sugar beet sector in Ireland.

Mr Kent pressed upon the Minister that in any ANC review money must not be lost to Ireland.

He said cuts to the payments have impacted the most vulnerable in the farming community in the most marginal lands and that a process of reversing these cuts needs to be implemented.

Mr Kent reminded Minister Creed of the frustration of farmers on the ground at the continued delays in GLAS and AEOS payments, describing it as a wholly unacceptable fiasco which must never be repeated.

Finally, Mr Kent addressed the issue of the possible closure of the Regional Veterinary Labs.