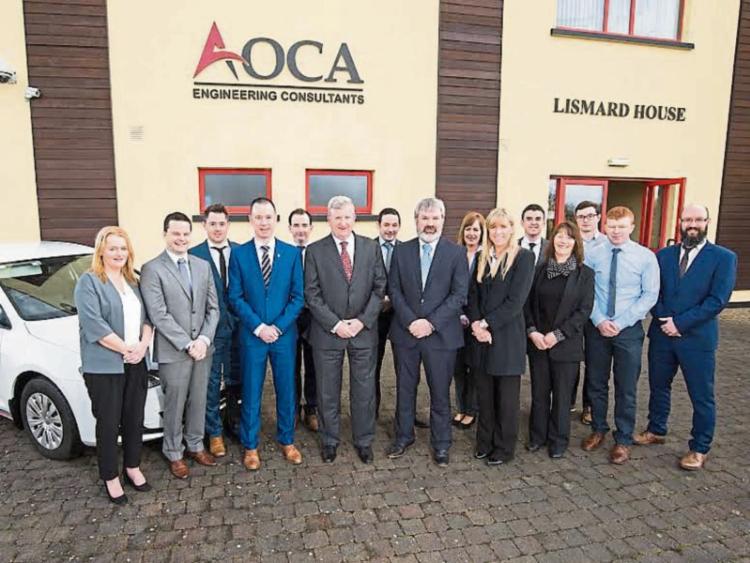 An acorn which has grown is the metaphor which Aidan O'Connell employs to describe the development of his Engineering and Project Management consultancy business, since its inception in Portlaoise 21 years ago.

The company, now re-branded as AOCA and based at Lismard House on the Timahoe Road, has established itself as one of the leading Consulting Engineering practices in the country.

Its growth and success is reflected in the company's re-branding as AOCA.

"The rationale behind the re-branding was the creation of a title which would be more inclusive of the people working with us," explains Aidan.

"Our ethos here is that people do not work for us, but with us.”

"We started out as a regional company, but we have expanded exponentially. We are now national, and this includes Northern Ireland."

Indicative of this is the fact that AOCA opened a Dublin office in 2014 at the Centrepoint Business Park, Oak Drive.

It has also now secured a major contract in the UK, something which heralds a major coup for the business, and which Aidan is very enthusiastic about.

This has led to an adjusted structure with Aidan now the CEO and Director for the UK, while Brian Byrne is Director for Ireland

"We have undertaken consultancy work in the UK before, but this is a major service contract which should last for at least a minimum of ten years, and will also involve some work in Spain."

Aidan estimates it is worth between €20 and €30 million.

"We won this contract based on the level and quality of the service we provide."

AOCA's remit in the UK will include structural defects in buildings, fire, explosions and a whole gamut of other insurance related issues.

AOCA is presently setting up its infrastructure in the UK, and they expect to open six regional offices to deal with the huge volume of business that comes in this market.

It's an exciting and major new chapter for the business which Aidan established in 1996, with a mere three people. Now there are 15 staff based in Portlaoise and 8 in Dublin.

It also does the largest volume of pyrite remedial work in the country.

This portfolio complements all the other work that the company undertakes, including a range of one off jobs which can include anything from private houses to hotels and warehouses.

Aidan notes that the demand for them to move into new areas is always present, and recently they have initiated a motor accident investigation section.

Returning to the acorn metaphor, Aidan is justifiably proud that the business has grown two and a half times since 2007.

"We grew through the recession. We have never had to let anyone off.

“Everyone who works in Portlaoise is from Co. Laois or lives here.

“We have always been acutely aware of where we started out and our local clients are our most important, despite our growth.”

AOCA undertakes the planning, engineering and construction management of numerous one off houses, extensions and more in the local area. As this week is “Engineers Week” in Ireland (4th – 10th March) we are happy to offer Leinster Express readers a free half-hour consultation to anyone considering a new build, renovation, extension etc. from 7th – 14th March 2017. Just quote AOCA CONSULT when calling.