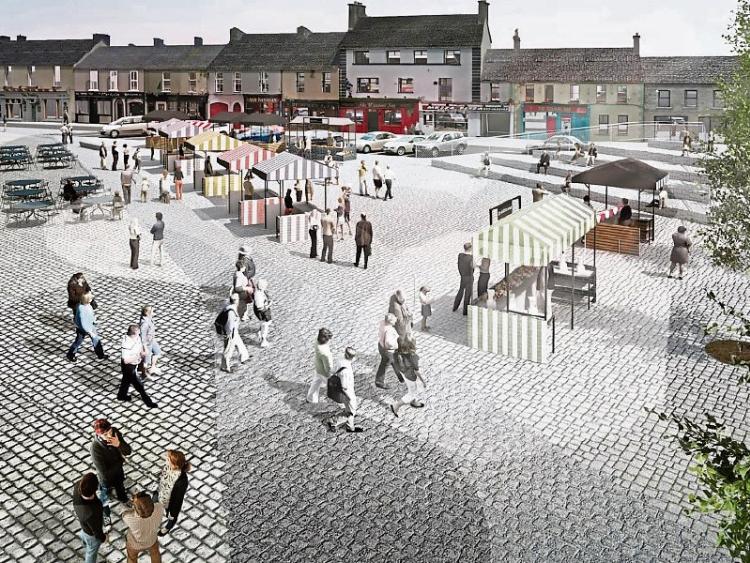 A major overhaul of Portlaoise town centre, aimed at revitalising the area, aims to stitch the town back together and remove the divide that has decimated the old town, according to the experts that drew up the Public Realm Plan.

Details of the plan are available to the public this week, but its contents were outlined by the team of consultants involved at a public meeting in Portlaoise on Tuesday night, April 4.

This was the third public meeting on the plan, which will run to 2040.

Among the key recommendations are:

l Expansion of the town's top and lower squares.

l Removal of all surface car parking from Lyster Square.

l Canopy over part of Lyster Square and addition of trees.

l Restoration of the town's heritage.

l Building the population of old town up from 600

Apart from improving the appearance of the town and reducing traffic, it has some key aims.

One big target is to get more people living in the old town centre. The population of old Portlaoise has dwindled to just 600, while the surrounding town and suburbs area have mushroomed to over 23,000.

Another aim, achieved mainly be tackling James Fintan Lalor Avenue, is to bridge the divide between Lyster Square and Main Street and the new retail area of the town, where some of the large supermarket chains are based.

Stitching the town back together, repopulatating the old centre and uncovering Portlaoise's rich heritage are key targets of the plan for Portlaoise, Richard McLoughlin, GVA, told last week's public meeting where it was unveiled.

He said the cultural heritage of the town is a central tenet of the plan and underpins the project.

Integration of the old and new parts of the town was one of the most striking themes of the plan. He said it also aims to be connected and walkable.

“We are looking to make sure the old and new become linked and seamlessly work together. It is a key outcome of this strategy,” he said.

He said getting people back to live in the town is a key component of the plan. He said the conditions have to be created for this to happen by making the place more appealing and attractive.

He said the Culture heritage of the town is one of the great assets the town has, but it needs exposure.

He said the plan was not based on somewhere in Europe, but what was good and smart and applied to the Portlaoise context.

Andrew Griffin, an architect with Urban Agency said the aim of changing James Fintan Lalor Avenue was to turn it from an ‘threat into an opportunity.’ He said it divides the town.

“The biggest thing is to turn JFL into a positive to help stitch the town back together,” he said.

He said that by taking away part of the road, a lot of public space can be liberated and used as green and amenity areas.

He said the Market Square and Lower square create two anchors for Main Street. He said a key issue is that there are 600 people living in the centre, but there is an oppotunty to increase the population.

Mr McLoughlin said people did not live in the town centre because there was not enough amenities.

“Portlaoise has a lovely main street and, with a little bit of work, it could really be a special place,” he said.

He said changes to Lyster Square were aimed at turning it into a public space.

The added green and amenity space would, he said, ‘boost retail’ and make it a more ‘visually appealing space.’ He said the redesign would help people park in the shopping centre and cross the road to walk. He said a new iconic building would be the centrepoint of three public parts of Lyster Square.

He said Main St could be helped by ending its use as a rat run and pedestrianising a section of it.

“By changing the traffic flow through the town centre, there is a huge opportunity to stop what is effectively a rat run to drive straight through Main St, down Bridge St, and out the other side.

“We propose a complete change to that, so that you won’t actually be able to,” he said.

He said restrictions could be enforced between business hours, between 10am-5pm .

“It will take a leap of faith but is well worth doing because there is a sense of changing Main St,” he said.

The plan goes out for public review for the next two weeks but it has yet to be adopted for implementation by Laois County Council. No costs have been put on the changes.

Hard copies of the plan will be available for public review in Laois County Council HQ from Wednesday of this week, and will also available on its website where a 3D film can be viewed.

This was compiled by Gavin Duffy from Mountrath.