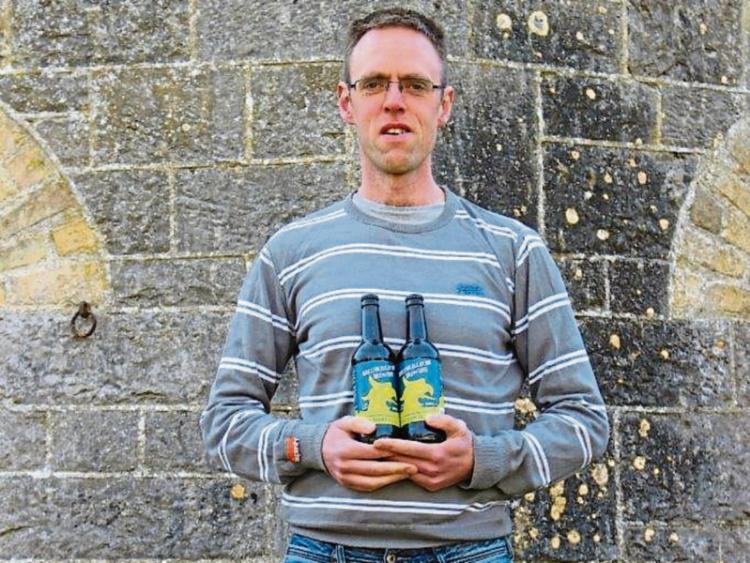 His descendants include Walt Disney, Charles Stuart Parnell, Lady Gregory and his 8-times great-grandson David, who is the 13th member of the Walsh family to live and farm at Ballykilcavan.

Some 378 years later, David and his wife Lisa are now diversifying by converting an 18th century grain store and millhouse into a new craft brewery that will source 100% of the barley it uses from the farm.

Ballykilcavan has a long history of producing quality food ever since David’s great-great-grandfather produced the best fat cow at the 1870 RDS Spring Cattle Show. Most recently, David won the Waterford Distillery “Best Barley Cup” in 2016, and he is passionate about Irish barley as the most important ingredient of beer.

“With our maritime climate, we produce some of the best malting barley in the world”, he says.

“I wanted to take our barley and produce top-quality tasty beers from it”. After 10 years of home-brewing and 2 years of training in malting and brewing with the Institute of Brewers and Distillers, the first bottles of Ballykilcavan Brewery beers will be launched in July.

David joined the New Frontiers Phase 2 programme in Athlone Institute of Technology Maynooth University in 2016 and has benefited greatly from the range of supports on the programme.

“New Frontiers was great in helping me to put together a full business plan, a validated set of financial documents and everything else I need to be able to stand in front of an investor and be confident of winning funding from them."

AIT is calling all Entrepreneurs with an innovative business idea to apply for New Frontiers 2017 commencing in July (Phase 1) and September (Phase 2).

AIT, in partnership with Maynooth University, will deliver the programme in the Midlands Mid-East region.

“If you are an ambitious and committed entrepreneur with an innovative business idea, New Frontiers will provide you with the skills and supports necessary to transform your idea into a successful business and help you attract the necessary investment funds to progress and grow,” he said.

A series of pre-programme Phase 1 Workshops to help prospective entrepreneurs to develop their business proposition will be held in the Midlands Innovation and Research Centre at AIT and MaynoothWorks at Maynooth University in July and August..

New Frontiers is an Enterprise Ireland funded programme that provides entrepreneurs with the skills, networks, facilities and supports needed during the business start-up process.

Participants on Phase 2 receive up to €15,000 in salary over six months from Enterprise Ireland. Applicants should have an innovative business idea with growth and export potential.

For more contact Nick Allen at 090-6483043 or see www.ait.ie/newfrontiers or email nallen@ait.ie