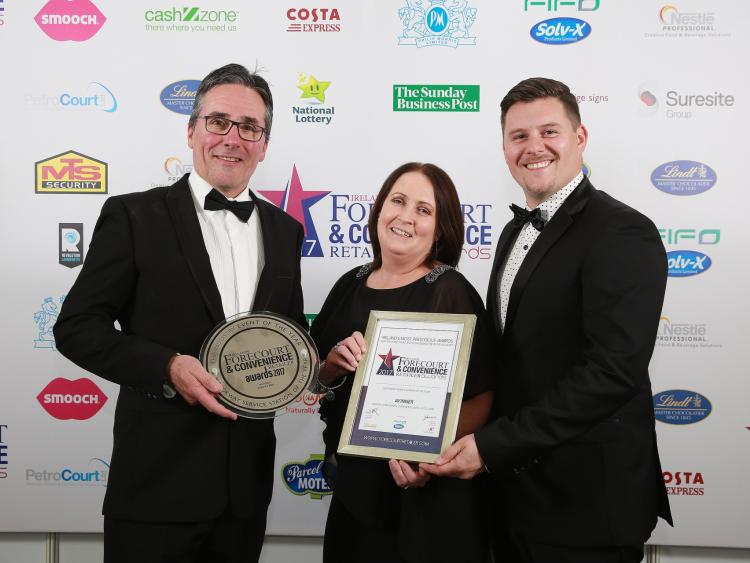 A Laois forecourt retailer has won a major prize at this year’s biggest retail awards ceremony in Ireland.

After rigorous judging, Manor Stone Service Station in Ballacolla won the new Motorway Services of the Year prize at the Ireland’s Forecourt and Convenience Retailer Awards.

The awards ceremony took place on September 6 at the Clayton on Burlington Road, Dublin.

“It’s amazing to win! This prize however also recognises the effort of the entire team at the site, and the amount of hard work that has contributed to this win tonight.

“It just goes to show what a well organised team can accomplish, and everyone at the site has contributed to this award,” he said.

The ceremony was hosted by Irish broadcaster Miriam O’Callaghan and the awards – now in their 16th year – celebrated the finest forecourt retailers from across the island.

The event also saw Topaz Dublin Port overcome world-class competition from throughout the island of Ireland to win the overall prize of Forecourt and Convenience Retailer of the Year.

Ireland’s Forecourt and Convenience Retailer Awards is a pivotal event for the Irish forecourt industry, acting as a benchmark of excellence for the sector and a key driver of innovation and aspiration.

The local forecourt industry has a significant and growing share of Ireland’s 18 billion Euro grocery and convenience market.

While recognised as one of most advanced forecourt markets in world, the sector across Ireland also plays a significant role in local communities, providing support and assistance for many local clubs and charities.

It is this variety of roles played by the sector that is recognised at these important awards.

Another significant winner on the night was Applegreen founder and current CEO Bob Etchingham.

Having spent almost 40 years in the Irish forecourt Industry, Mr Etchingham is now leading the charge of one of Ireland’s biggest and best forecourt companies as they continue their unprecedented rate of acquisitions and openings across the UK and US.

The event’s 450 guests gave a rousing standing ovation for the Applegreen boss as he took to the stage, telling guests of his delight at receiving the prestigious award.

Bill Penton, publisher of Ireland’s Forecourt & Convenience Retailer, welcomed the calibre of support and entries for this year’s awards.

“These awards are an important institution for the industry, and the calibre of entries and people who attended the event is a reflection of the strength of not only the awards themselves but of the industry in general,” he said.

“It’s an honour to have the opportunity to celebrate some of the most significant players in Irish business and see many of them give their support to these fantastic awards.”

The evening’s awards followed an afternoon of industry talks and exhibitions as part of Ireland’s Convenience Retailer Summit.

The Summit, which involved a conference featuring an array of high profile international speakers along with a focused Trade Exhibition with 40 key exhibitors, welcomed some 400 delegates to hear about ‘The Future of Convenience’.

Ireland’s Forecourt & Convenience Retailer is Ireland’s number one trade publication for the retail and forecourt industry. Its annual awards are judged by an independent panel from Spotcheck, and regarded as the annual focal point the retailing calendar in Ireland.