The breaks look set to be put on the growth of Portlaoise to stop the problem of 'citygenerated overspill'.

Laois County Councillors have feared that Laois and Portlaoise could lose out in the new National Planing Framework called Ireland 2040 our plan.

The councillors have been sent a draft of the plan. It restricts population growth in Laois to just 25% over the next 20 years. This would mean Laois' main town could not grow beyond 30,000 - the current poplulation is 22,500. Laois is one of 41 large towns identified but not name in the the draft.

Portlaoise lost out in the National Spatial Strategy which gave a priority to Athlone, Tullamore and the Midlands. This plan only mentions the cities and appears to leave the priority of towns up to regional forums. However, an added problem Portlaoise is facing on this front is its proximity to Dublin. The new plan wants to move away from the spread of Dublin into nearby towns. The three towns priority towns in the midlands remain further from Dublin than Portlaoise.

Between 2017 and 2040, approximately 25,000 new homes will need to be provided in Ireland every year to meet people’s needs for well-located and affordable housing, with increasing demand to cater for one and two person households.

The plan says there is scope for potential growth in all large towns in Ireland. In the context of Ireland 2040 as a National Framework, this will be determined by the relevant Regional Spatial and Economic Strategy (RSES) for each Regional Assembly area, also taking into consideration the potential of smaller towns and rural areas.

It says that within both the Eastern and Midland and Southern Regional Assembly areas, overall targeted population growth for large towns with >10,000 population in 2016 should generally be 20-25%, which is ahead of projected national average growth. The purpose of this is to accommodate focused and proportionate growth while preventing excessive levels of citygenerated overspill development in certain locations.

In recognition of a significantly weaker urban structure in the north and west of Ireland, the plan aims for overall targeted population growth for large towns with >10,000 population in 2016 within the Northern and Western Regional Assembly area, should generally be 40%, or almost twice projected national average growth.

In all three Regional Assembly areas, this does not mean that individual settlements cannot develop beyond the generally targeted rate of growth for each area, but it does mean that they all can’t, as growth must generally be balanced between them at the regional and local planning stages.

It is appropriate that the Regional Spatial and Economic Strategies (RSESs) for each Regional Assembly area address the potential of large towns and their surrounding regional catchments in conjunction with consideration of growth targets for cities and smaller towns and rural areas.

The plan finds that determining future targeted patterns of growth in large towns, key considerations will include: Whether a settlement is located inside or outside one of the five defined City-Region catchments. The scale of employment provision and net commuting flows. Accessibility and influence in a regional context. The extent of local services provision i.e. administration; education - particularly third level; health; leisure and retail.

It says, particular sub-regional interdependencies, for example, where a settlement may be located in relation to a number of nearby settlements. Local ambition, initiative and commitment to achieve compact growth.

Within this figure, there is a wide range of differing housing needs that will be required to be met. On this basis and in applying the principle of reusing existing stock.

In terms of overall population and employment growth and new housing provision, the five cities of Dublin, Cork, Limerick, Galway and Waterford will be targeted to accommodate 50% of overall national growth between them, with Ireland’s range of large and smaller towns, villages and rural areas accommodating the other 50%, within a better national infrastructure grid in terms of mobility, communications, energy systems and essential public and community services and facilities. 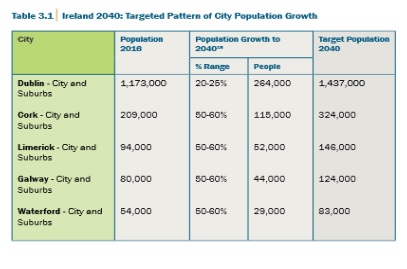 To address rural decline, a significant proportion of national population and economic growth will be targeted at building up the fabric of our network of smaller towns, villages and rural areas with much of that happening by redeveloping derelict and under-utilised lands inside small towns and villages.

At least half (50%) of future population and jobs growth will be focused in the five Cities Dublin, Cork, Galway, Limerick, Waterford and their immediately adjoining suburbs. A target of around two-thirds (66%) to be focused in the cities and their suburbs together with a number of large regionally distributed towns and their environs to be identified through the Regional Spatial and Economic Strategy (RSES) process.

In terms of Ireland’s future population, targeting this pattern is significant because it represents a shift from projected trends. In the context of around one million additional people in Ireland by 2040, it means planning for:

Ireland 2040 will be given full legislative support within the planning system, including regular review and update, reflecting changing circumstances and in line with city and county development plan review cycles.

The Government says it introduces more streamlined approaches to zoning land for development in line with infrastructure provision The planning legislation underpinning Ireland 2040 will also lead to the creation of a new independent Office of the Planning Regulator (OPR), which will also be responsible for monitoring implementation of Ireland 2040.

The plan says Ireland’s three Regional Assemblies must each prepare a regional strategy in accordance with the Framework set by Ireland 2040. The plan ads that this means that the Ireland 2040 will be followed through, while also enabling greater detail to be addressed, at an appropriate scale.

The plan replaces the National Spatial Strategy (NSS) the 20-year spatial plan published in 2002. Its replacement says public understanding of the document focused almost entirely on which cities and towns were designated as ‘gateways’ or ‘hubs’ to drive growth and build scale in their surrounding regions and localities. This gave rise to a perception of ‘winners’ and ‘losers’ that undermined the objectives that the NSS was seeking to achieve.

However, only the cities are specifically mentioned the new plan. 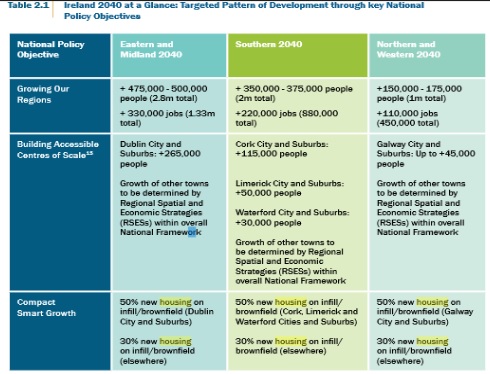