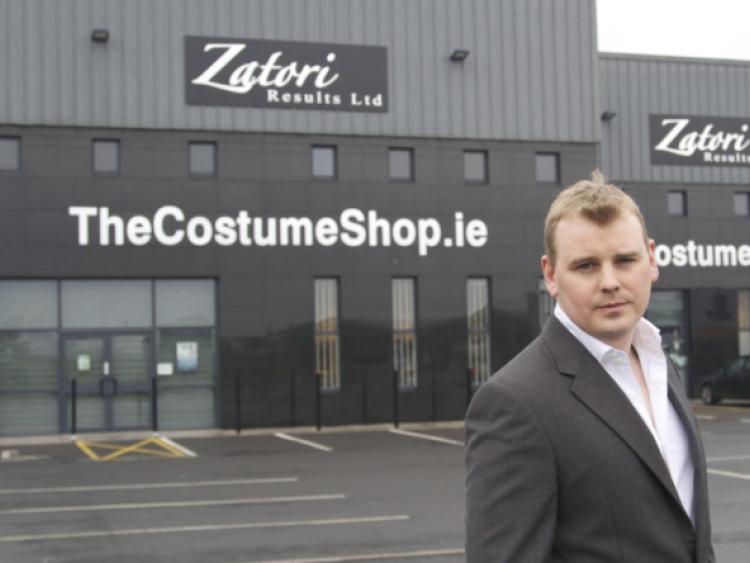 Laois entrepreneur Ronan O'Brien of Zatori Results flew the flag for Laois in the EY Entrepreneur Of The Year.

Now in its 21st Year, the EY Entrepreneur Of The Year™ (EOY) 2018 programme has officially opened for nominations from Laois.

The theme of this year’s programme is “Ambition” and all sectors and businesses of all sizes are invited to submit their nominations until 16 February. The 24 finalists for 2018 will be announced on 23 April.

Laois entrepreneurs are encouraged to put themselves forward to follow in the footsteps of well-known Laois business people who have been involved in the programme as finalists in the past such as Ronan O’Brien of Zatori Results.

The successful finalists will have the opportunity to connect, learn and do business with the EY Entrepreneur Of The Year™ alumni network, which consists of almost 500 of Ireland’s most successful business people. The finalists will get an opportunity to participate in the renowned international CEO Retreat which is designed to help Irish entrepreneurs transform their thinking and vision through executive education. They will also gain significant profiling, nationally and internationally.

“The diversity of participants in terms of industry, gender and location continues to grow each year. This is something we are very proud of. In 2017 30% of our finalists were female, fantastic role models for any young aspiring entrepreneur. I would strongly urge entrepreneurs across all industries and backgrounds, particularly female entrepreneurs, to nominate themselves this year to reflect the wide range of talent here on the island of Ireland,” he said.

Who can be nominated?

Operating in more than 60 countries worldwide, EOY is recognised as the most prestigious business accolade for entrepreneurs. The programme is open to entrepreneurs across all sectors on the island of Ireland. The awards programme is divided into three categories - Emerging, Industry and International - with 8 finalists chosen per category. The 24 finalists will be selected by an independent panel of judges, comprised of former EOY winners and chaired by Anne Heraty of CPL Resources plc. Individuals who wish to put themselves forward or nominate an entrepreneur with their consent, can fill out the online nomination form at www.eoy.ie or call the EY Entrepreneur Of The Year™ team for further information at eoy@ie.ey.com. The deadline for nominations is Friday, 16 February 2018.

Speaking at the launch, CEO of CPL Resources plc, Chairperson of the judging panel, and winner of the EOY programme in 2006, Anne Heraty said: “Each year I look forward to the launch of EOY and seeing the exciting new entrepreneurs that we will welcome into our Alumni community. It has been interesting to see the number of new industries emerging over the past few years, with an increasing focus on the global market, a trend that will no doubt continue this year. I expect to see the calibre of finalists increase once again in 2018, as we challenge them to improve and push their ambitions beyond what they would usually aim for.”

Last year saw a strong mix of male and female finalists across eight different sectors who collectively employed over 5,200 people and generated revenues of almost half a billion euro in 2017. Harry Hughes, of Portwest emerged as the overall winner at the 2017 EY Entrepreneur Of The Year™ Awards and will go on to represent Ireland at the World Entrepreneur Of The Year™ Awards in Monaco in June. Evelyn O’Toole, of CLS took top prize in the Industry category, while Jack Teeling from The Teeling Whiskey Company won top prize in the Emerging category.

What finalists can expect

The finalists will engage in a strategic growth programme over a 10-month period which includes a week-long CEO Retreat. As part of this international retreat, this year’s 24 finalists will join a group of more than 100 entrepreneurs, all previous finalists and winners of EY Entrepreneur Of The Year™ programme, and meet CEOs and entrepreneurs from some of the world’s biggest multinational companies.

The programme will include executive education sessions, the annual Gala Awards Dinner and many additional finalist benefits. In addition they will receive significant media profiling. An award is presented for each category, and an overall winner is announced as the EY Entrepreneur Of The Year™ Awards in October. That person will go on to represent Ireland at the World Entrepreneur Of The Year™ awards in Monaco in June 2019.

A NEW YEAR'S RESOLUTION THAT WON'T BREAK YOUR BACK