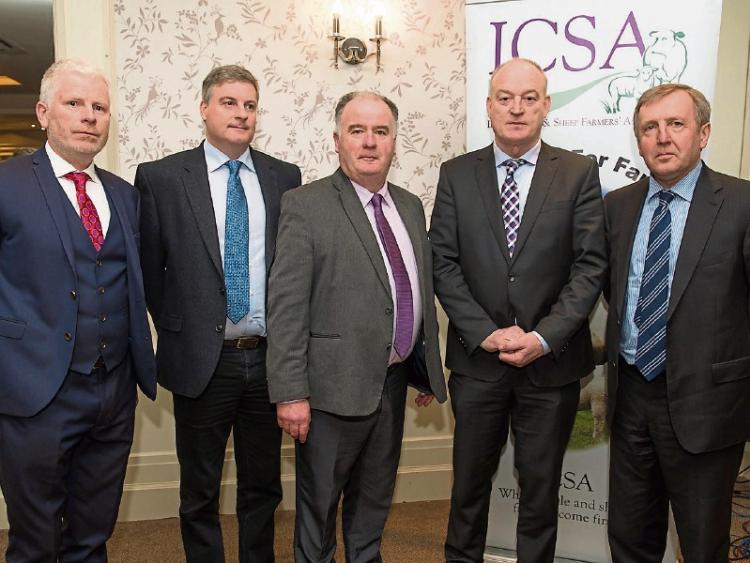 ICSA national president Patrick Kent has said “The next CAP must be designed on the principle that those farmers who go the extra mile get paid for doing so. “We want schemes that are a lot more like REPS and a lot less like GLAS.”

Mr Kent was addressing Minister Michael Creed and members of the ICSA National Executive at the ICSA AGM and Annual Conference which took place in Abbeyleix today (25 January 2018).

The Future of Food and Farming formed the theme of the conference and Mr Kent outlined the association’s key requirements from the government on its approach to CAP and its funding post Brexit, climate action and international trade deals.

He stressed the importance CAP reforms that recognise the real contribution of farmers and rewards them accordingly.

To achieve this Mr Kent said, “ICSA is calling on the Government to do everything in its power to ensure that the CAP is fully funded. We can’t shirk the fact that the UK is leaving and the funding gap must be filled. That means Ireland must step up to the plate.”

“The next CAP needs to come up with better ways of putting money in the hands of less intensive suckler farmers through a real, meaningful agri-environment scheme that should be focused on climate change deliverables and that should be profitable for farmers who opt in.”

However, Mr Kent launched an attack on policy makers who try to blame farmers for climate change and he pointed to the 2017 Carbon Majors Report which indicates that 71% of global emissions are accounted for by just 100 fossil fuel companies.

“Farmers are actually helping through carbon sequestration. We are sick and tired of being lectured by vested interests, by misguided environmentalists and by animal rights extremists.”

“We stand ready to implement climate change programmes. But the day of expecting farmers to work for free must end.”

Mr Kent also suggested that proposals from Brussels to reduce biofuels produced from European crops is incomprehensible if they are serious about climate change or if they want to ensure a better future for EU farmers.

Mr Kent said that we need a much more broad strategy for sucklers.

“There is no point in a €200 sticking plaster if suckler cow numbers go up and live exports go down.

“If we are serious about sucklers, factories must commit to paying more for heavy U grade carcasses. For that reason, I am calling for a review of the beef grid. ICSA believes that it is now urgent to move to payment on meat yield and that farmers should get some of the benefits from the fifth quarter bonanza.

Mr Kent reiterated ICSA’s opposition to any Mercosur trade deal that would bring vast quantities of extra beef in to Europe with continuing uncertainty about what will happen with UK markets arising from Brexit.

Addressing the decline in the live export of sheep, Mr Kent called for the removal of the holding period prior to export which continues to frustrate the trade. He said he remains sceptical about the need for EID tagging for lambs going direct to factories.

Mr Kent also called for the re-convening of the tillage forum.