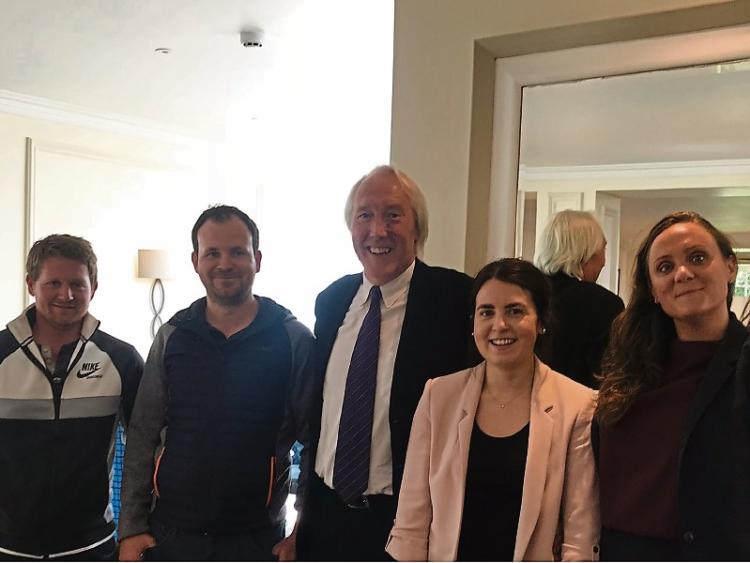 A full house of approximately 50 people turned up.

First up was 8.64 acres at Ballydavis, The Heath.

This excellent arable land in one lot was chased by three bidders and the auctioneer put it on the market at €110,000.

A local dairy farmer and local businessman then fought it out for another 10 bids till the hammer fell at €123,000.

The businessman was delighted with the purchase as the family have more land nearby.

The vendor Mr. John Whelan was very happy with the price achieved as it exceeded the reserve by €13,000.

The Vendors were Eoghan Byrne and Aoife Byrne.

The farm is situated beside Lumville Stud and as the Sheikh Hamdan bin Rashid Al Maktoum, Deputy Ruler of Dubai, United Arab Emirates wasn’t interested in expanding his current operation it opened up the door for surrounding farmers.

The farm was offered for sale in 3 lots.

Then Matt Dunne put the entire to the floor and it was this that generated the most interest.

Three active bidders pursued it and the farm went on the market in its entirety at its reserve €910,000.

When it reached €950,000 there were only two bidders, a local business man and a dairy farmer whose enterprise is less than two miles away.

These two battled it out over 48 bids until eventually the dairy farmer (the Nagle family) won the day.

The purchasers were delighted as they had just bagged a smashing farm.

The vendors, a brother and sister, had mixed feelings - ecstatic about the price achieved but sad about selling the land.