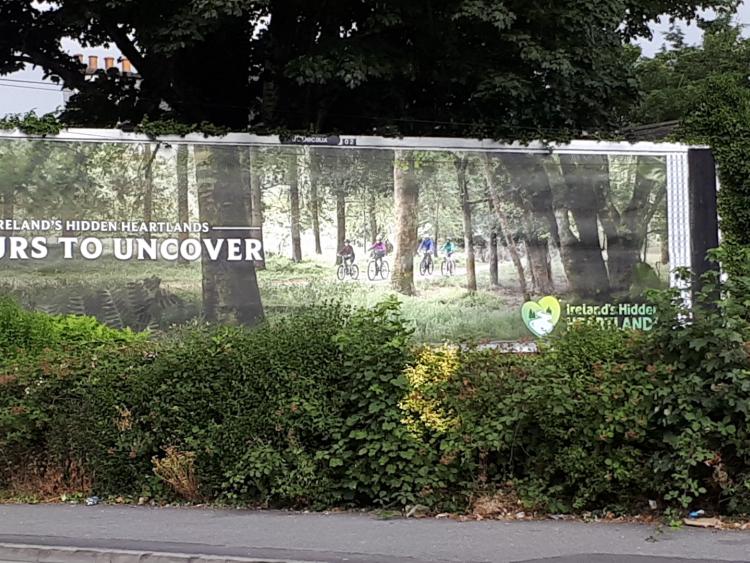 Billboard in Portlaoise on the Dublin Road.

A huge billboard ad has been erected in Portlaoise as part of a €1 million advertising campaign promoting the latest tourism package for Ireland's 'midlands' from which Laois is excluded.

The unusually large double size billboard also features a family mountain bike trail in a forest - a similar project under construction in Laois that Fáilte Ireland was reluctant to back.

The billboard is part of Fáilte Ireland new domestic marketing campaign for the Hiddlen Heartlands brand. The multi-media brand awareness campaign worth €1m will run on TV, outdoor, radio and digital channels.

The Portlaoise billboard is located near the town's prisons in a prominent position on the Dublin Road on the approach to the town centre.

Fáilte Ireland expects a related TV to reach 75% of the television viewin gaudience over the coming weeks featuring during The Sunday Game, Coronation Street, Fair City and RTÉ News.

Ireland’s Hidden Heartlands was unveiled in April. Bord Fáilte says the brand aims to 'shine a spotlight' on the Midland’s rich natural and cultural assets, including its many lakes, walks and blueways, and the myriad of ways that visitors can enjoy them.

Ireland’s Hidden Heartlands covers the ‘heart’ of the country, from Leitrim down to East Clare and extending through Longford, Roscommon, East Galway, as well as parts of Westmeath, Cavan, North Tipperary and Offaly.

Laois is included in Ireland's Ancient East. It is the only midland county not to be included in the Hidden Heartlands.