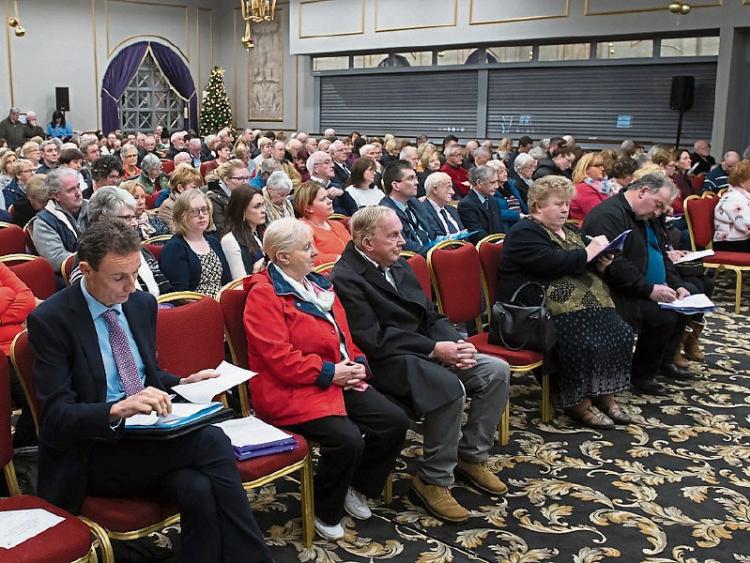 Heading for 50 and healthier than ever and still growing. That’s Portlaoise Credit Union, or as it is now, People First Credit Union, incorporating Abbeyleix, Stradbally and Athy.

Packed was its annual general meeting in the Midlands Park Hotel, Portlaoise, on Monday night (December 10).

Chief Executive Officer Sean Dunne who noted that the Credit Union would next year celebrate its Golden Jubilee.

An organization that began in 1969 when 17 visionary people each contributed half-a-crown. Today that seed capital has grown to assets worth an astounding €136,861,472. 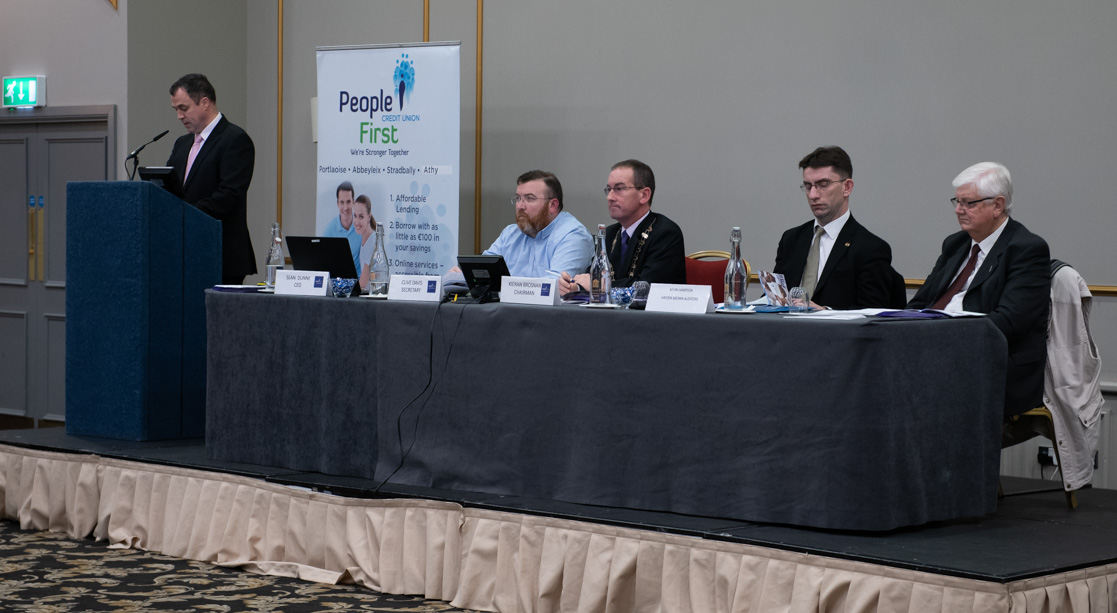 And, as Mr Dunne pointed out, membership is now nearing 40,000. Some jump from 17. He said the CU was in a strong financial position, ready to serve future generations.

However, he also noted that Brexit was having an effect.

“There is no doubt that Brexit and the rising cost of living are impacting on members’ willingness to borrow,” he said.

On a brighter note, he said members’ savings continued to surge—up by approximately 10m euros in the past year.

Frank Cronin, presenting the Credit Control Committee report, said the value of loans “charged off” in 2018 was €155,542, a significant reduction on the 2017 figure. 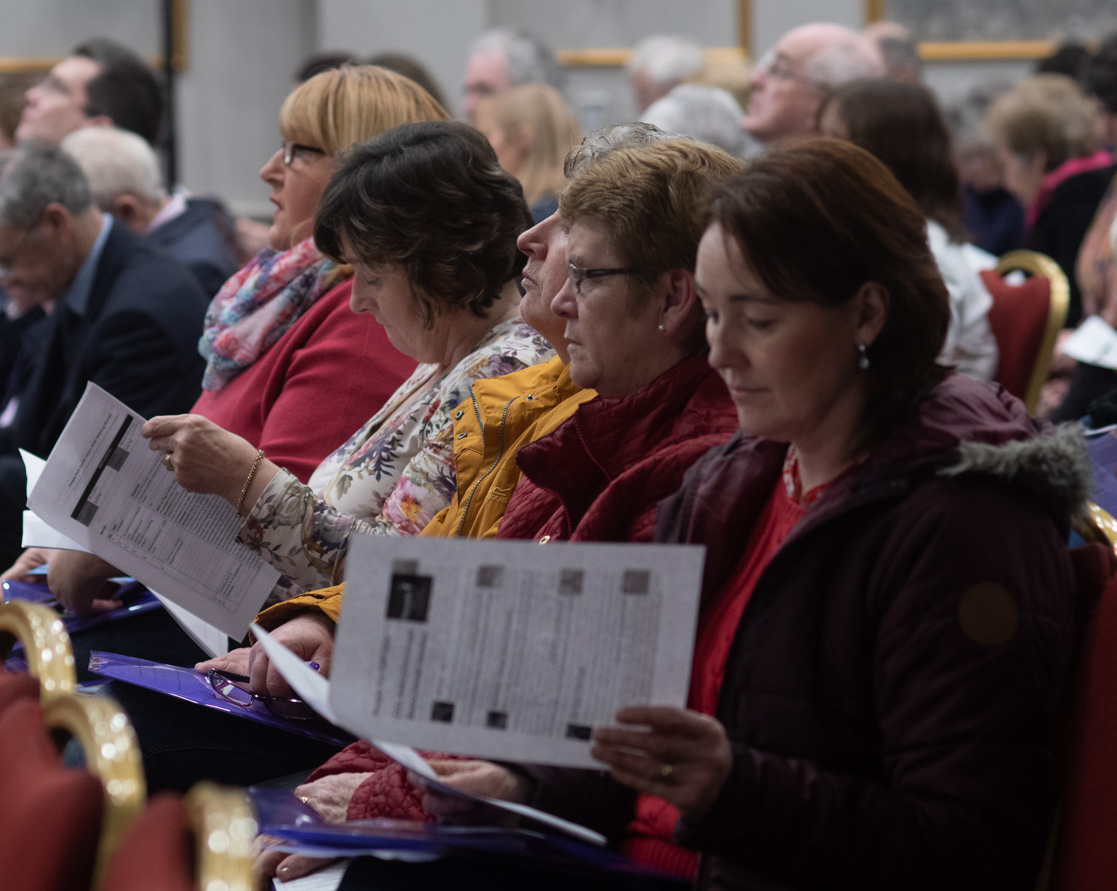 Checking the figures at the AGM. Picture: Denis Byrne

Deirdre Walsh, of the Membership Committee, said 1,383 people joined the CU this year, a slight reduction on the previous 12 months.

Before transfers, the Credit Union’s income exceeded expenditure by €1,114,879.

Chairperson Kieran Brosnan declared: “Your Credit Union is in a strong, stable and financially secure position.”

Some speakers from the floor expressed concern about the extent of the Central Bank’s control over Credit Unions, including People First.

Another contributor queried the increasing cost of funding pensions for CU staff. He contrasted this with the dividend for members—0.125%. 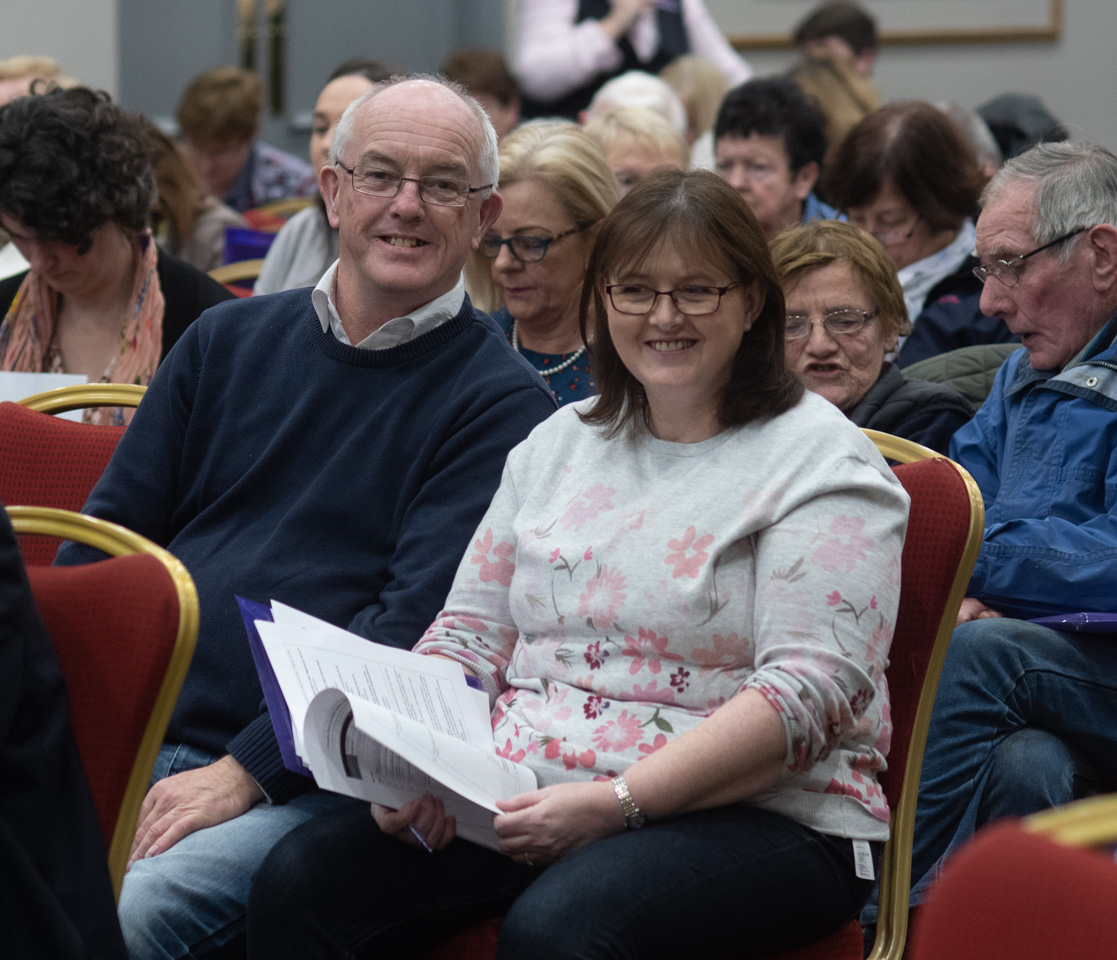 A link with the early days of Portlaoise CU was broken when Phil Coughlan retired from the Board Oversight Committee.

Her husband, John Coughlan, and sister, Nancy Ruschitzko, were founder members of the Credit Union.

Phil gave 40 years of voluntary service to the Union, including a term as Chairperson.

Patrick (Patsy) Campion also retired from the Board Oversight Committee at the AGM. He, too, for many years gave generously of his time to the CU. Mr Dunne assured the meeting that People First was committed to delivering to members a current account and debit card service.

One newcomer was elected to the Board—Elsie Cummins. A Tipperary native, she is a nurse and moved to Portlaoise in 2015.