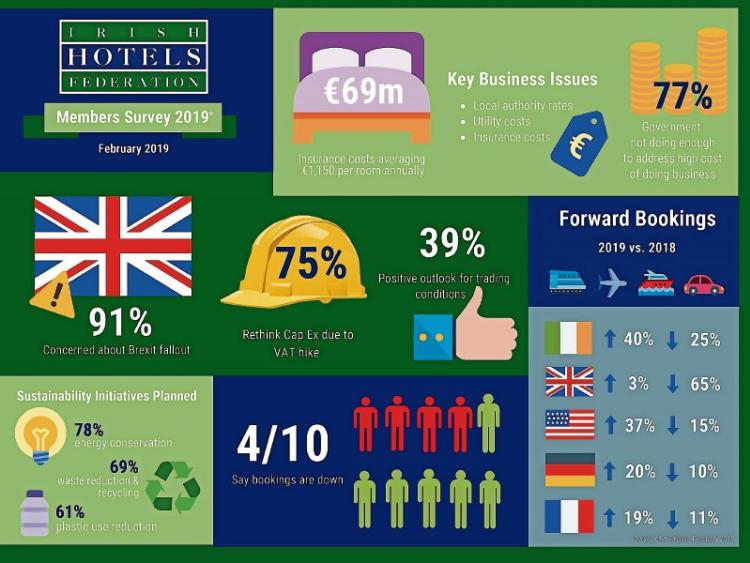 Business sentiment amongst hotels and guesthouses in Laois and across the country has deteriorated sharply year on year, representing a stark change in outlook compared with 2018 according to the Irish Hotels Federation (IHF).

An industry survey undertaken by the IHF ahead of its annual conference in the Gleneagle Hotel & INEC, Killarney reveals that only 40% of hoteliers nationally now have a positive outlook for their business over the next 12 months. This compares with 79% who reported a positive outlook at the start of 2018.

Major concerns for the sector include the continued risk of a disruptive Brexit and reduced competitiveness due to the hike in tourism VAT, increases in the cost of doing business and growing economic uncertainty internationally.

In particular, the higher VAT rate is putting investment in additional hotel capacity at risk, with 75% of hoteliers stating they are now reassessing plans to increase capital investment as a result of the increase.

Performance so far this year has been mixed, with 39% of hoteliers across the country reporting a drop in overall business levels compared to this time last year while 48% report an increase.

This has largely been driven by growth from North America and Europe, which is masking continued poor performance of the UK market. Almost two thirds of hoteliers (65%) say advance bookings for 2019 from the Great Britain are down while almost six in ten (57%) are seeing a fall in advance bookings from Northern Ireland.

With the vast majority of hoteliers (91%) concerned about the impact Brexit will have on their business over the next 12 months, Matt O’Connor, Chair of the Midlands branch of the Irish Hotels Federation says growth in recent years cannot be taken for granted.

“With the prospect of a disruptive Brexit looming, the sharp fall in business sentiment amongst hoteliers is not surprising. Our fear is that regional tourism businesses risk being hardest hit, especially those operating in areas that are heavily reliant on seasonal and UK markets.” Tourism currently supports 2,300 jobs in Laois and contributes some €31m to the local economy annually.

“However, this could be put at risk if the Government does not take decisive action to mitigate the impact of Brexit and address the other serious challenges we now face such as the high cost of doing business in Ireland.”

“Tourism is an exceptionally competitive activity. We compete daily for business at both a domestic and international level and every tourism Euro spent by overseas and domestic tourists in Ireland is hard won.

“Maintaining our competitiveness is awbsolutely vital to sustaining the growth of the industry, which supports jobs in every country and town.”

“With 70 per cent of tourism jobs based outside of Dublin, tourism’s wide geographic distribution is critical to sustaining regional economies, and addressing the rural imbalance.

“And, as the biggest investor in Irish tourism, the hotels sector is playing a critical role.

“Hotels and guesthouses not only provide local employment opportunities, we buy local services, source locally produced food and provide a vital infrastructure in support of local business and communities,” he added.

Welcoming the Government’s commitment last year to introduce a Tourism Satellite Account within the Central Statistics Office (CSO), Mr O’Connor called for it to be implemented as a priority.