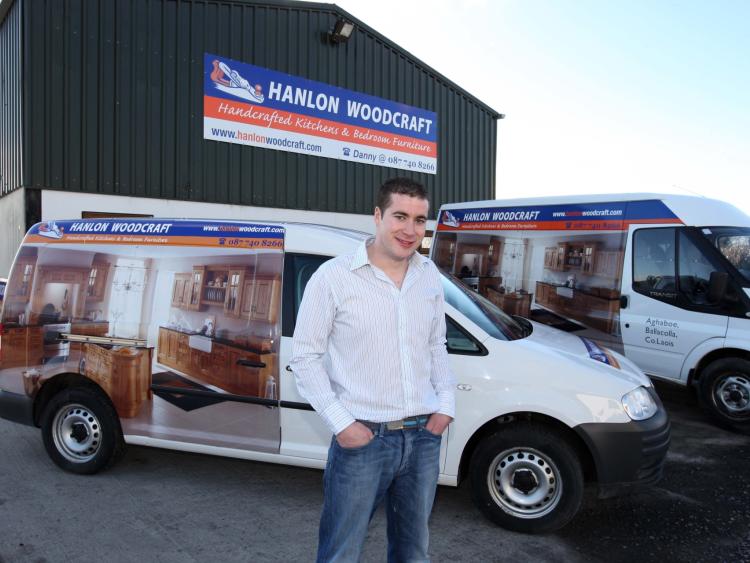 Hanlon Woodcraft is a growing business based in Aghaboe, Ballacolla. They are manufacturers of bespoke kitchens and bedroom furniture. They are an innovative company who have embraced a technological approach to a traditional manual manufacturing sector.

Hanlon Woodcraft was established in 2003 by Danny Hanlon, a well known Aghaboe craftsman, and the business has grown steadily in recent years with both an increase in employment numbers and an extended showroom and manufacturing facility.

Danny Hanlon from Hanlon Woodcraft was presented with his award by Cllr. John King, Cathaoirleach of Laois County Council, at an awards ceremony which concluded an active Local Enterprise Week in Laois.

The other category winners announced at the Laois Enterprise Awards today were Ballykilcavan Brewery who won the title of Laois Start Up Business of the Year; Machado Mens Grooming - Most Innovative Business and Alan Meredith Studio which was crowned as Exporter of the Year.

Speaking after Hanlon Woodcraft was announced as Laois Enterprise of the Year, Evelyn Reddin, Head of Enterprise in the Local Enterprise Office said, "Hanlon Woodcraft are very worthy winners of this year’s Laois Enterprise Awards. Danny Hanlon and his team have shown impressive business growth for the past number of years and have very ambitious plans for future growth. They have engaged actively with the Local Enterprise Office to help plan their business growth in a sustainable manner. The standard of entry into the local rounds of the National Enterprise Awards was very high this year and our judging panel had a very difficult task in deciding on the eventual winners.

"This is a real sign of the strength and continuing growth of the small business sector in Laois. Hanlon Woodcraft are now going to represent Laois in the National Enterprise Finals and we believe they will be very strong contenders at this national level."