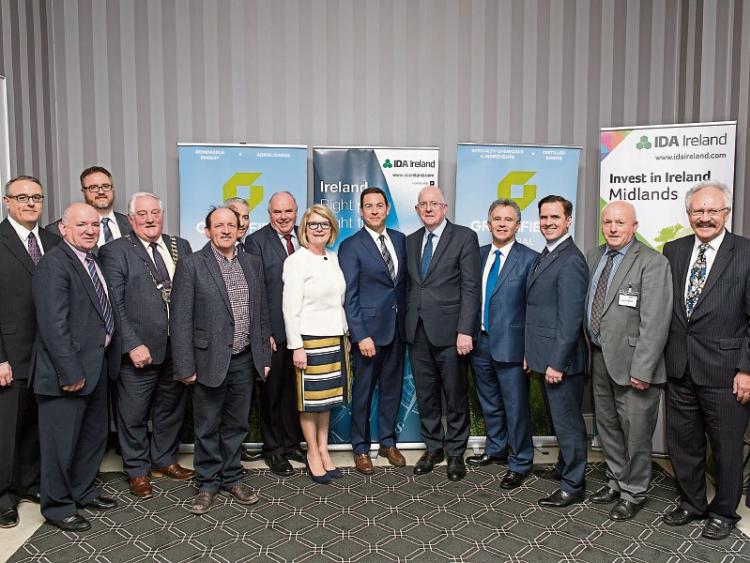 The bosses of the Canadian company, Greenfield Global that is setting up in Laois heaped praise on the Industrial Development Authority (IDA) last week.

In ways, this hard work in winning the business was long overdue as Laois hardly registered on the map for many years.

The agency is responsible for bringing foreign direct investment to Laois. While it has a long record of success nationally, Laois has been a black spot.

In recent years, the authority has come under a lot of pressure locally because the dramatic growth in the county's infrastructure required to support the needs of multinationals has not been matched the arrival of firms. Roads, broadband and other services needed to attract foreign investment and jobs have all been enhanched in Laois.

Martin Shanahan is the CEO of IDA Ireland. He was in Laois last week for the official announcement which he feels vindicates the strategy to get jobs into the regions.

“This is a most welcome announcement for Portlaoise and the entire midlands region and one which will considerably benefit the economy of the region,” he said.

Speaking to the Leinster Express he said a combination of factors has worked in favour of Laois.

He said that availability of a site on the IDA's Portlaoise business park was attractive to Greenfield as it fits what they need.

He said the presence of many of their clients in Ireland, and Portlaoise's accessibility to these locations was another obvious factor.

He said the smooth planning process for the project through Laois County Council also helped.

As to whether it could be the beginning of a new chapter for Laois as a location for other multinationals, Mr Shanahan was cautious but said the IDA now has a reference client.

“It is extremely competitive out there. There are already 60 IDA client (companies) in the midland region.

“As somebody who goes out to market Ireland our first job is to put Ireland on someone's radar. That in itself can be challenging at times.

“Obviously, we have an ambition to increase investment outside of Dublin by 30 to 40%.

“That is manifestly working. If I look at the performance for the last four years, there are 27,000 more jobs on the ground in regional locations than there were at the beginning of our current strategy.

“The fastest growing region, albeit from a smaller base, last year was the midlands - a 14% increase.

“Is getting an investment like this important? Of course, it is. It is very important because it will act as a reference site for other clients.

“When we are out marketing, being able to point to other reference sites is very important,” he said.

Mr Shanahan said Ireland's reputation as a hub for life science companies was important in the Canadian company's decision making.

“This is their first investment in Europe so any other location is a possibility in that regard but they chose Ireland. One of the reasons they chose Ireland is the strength of our pharmaceutical, medical technology and biological sectors which the IDA has been working on building up over many years,” said Mr Shanahan.

“Greenfield Global is a welcome addition to the EIT sector here and will be an important support to the strong and growing life sciences ecosystem in Ireland, providing locally sourced, critical raw materials. I wish Greenfield Global every success with their plans. It is great to see further investment coming into Portlaoise,” he said.

Greenfield, which has its headquarters in Toronto, has operations in 12 locations across North America.

The company’s products are used in a variety of sectors in many countries.

It plans 75 initial jobs in Portlaoise.