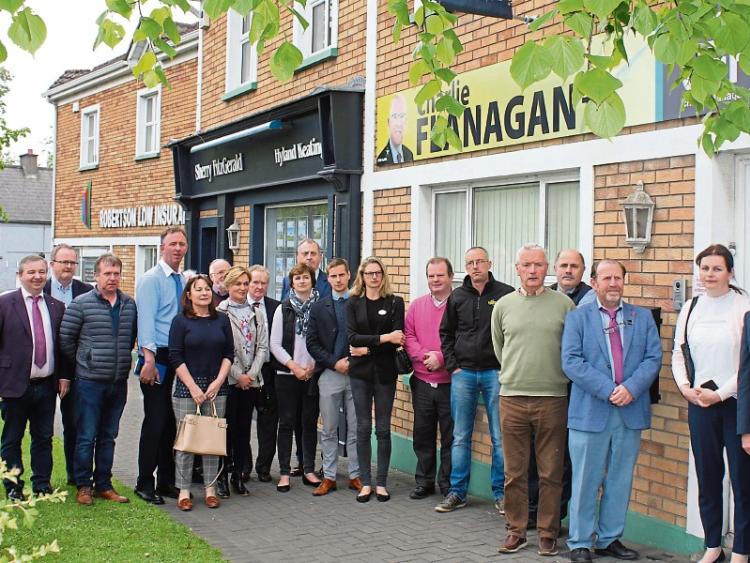 Portest at the office of Minister for Justice Charlie Flanagan

The demonstration took place in conjunction with an ISME meeting in Portlaoise called to voice concern at what it claims is a failure to reform the insurance industry.

ISME said several trade associations and their members were Kavanagh’s Bar to register their disquiet at Government failure to follow up on the recommendations of the second and final report of the Personal Injuries Commission, chaired by Mr Justice Nicholas Kearns.

ISME said what stood out to all attendees at the meeting was the extreme difficulty many of them are under to renew insurance cover. Some people said their business had only days of cover left, and they were unable to take bookings for June.

Another speaker said that her business was operating without insurance, because she couldn’t get any, but the business was the only livelihood she and her employees had.

ISME said some contributors were clearly emotional and under a great deal of stress.

Many voiced their concern that Government promises to do something by the end of this year, or early next year, will simply be too late for them. They face imminent closure.

Attendee Shane Holohan from Taking Flight spoke about how his business is being 'ripped apart' because he cannot secure public liability insurance. He said it started to become a serious issues about two years ago.

“We had gotten used to our insurance premium doubling year on year and then two years ago, public liability insurance disappeared. I secured one quote from a broker here and the premium went from €1,000 to €16,000 in one year. I had to then go outside the country to Wales where we got a broker.

“I just found out two months ago that the underwriter there isn’t going to renew our policy. I now can’t plan for the future; I can’t plan for summer camps because from mid-July we don’t have public liability insurance. The irony of the whole thing is we can secure insurance for individual teachers so while you or your child is up in the air, you’re covered, but you simply walking in the door – you are not covered – it’s basically ripping the business apart. We haven’t even had any claims against the business,” h e said.

Daniel Hickey of AllinAll Ingredients said Enda Kenny promised as Taoiseach that Ireland would be the best little country to run a business in.

He said the Goverment has failed to deal with the everyday problems businesses are facing with sky rocketing insurance premiums, and in some cases an inability to get cover thereby putting them out of business. No more promises only action is what is required,” he said.

Elaine Mullally from Clown Around Play Centre Ltd called for Garda Fraud Investigation units in Ireland and the book of Quantum to be revised as a matter of urgency, otherwise a huge section of enterprise in Ireland will be wiped out.

Kevin Bracken is concerned about the pressure insurance costs are putting on business.

“I have two Maxol forecourts service stations, I’m in business since 1987 and for the first 27 years I had no personal injury claims on any of my premiums, the only reason I would have been taking out insurance would have been to cover me for break ins and robberies.

His main concern is personal injuries.

“As a result, in every area of my business I am constantly watching, to the point where we are now paranoid. One of my businesses had a policy three years ago for €3800, last year that rose to €8100, this year I just don’t know what that figure will go to,” he said.