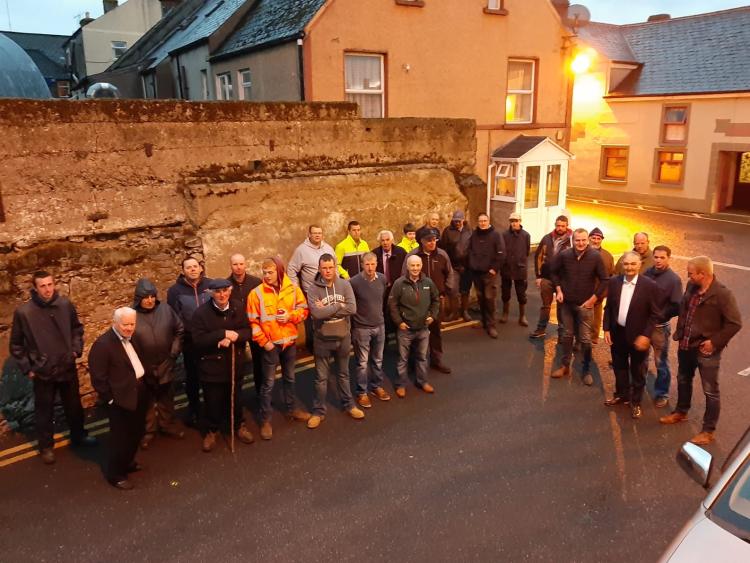 Farmers protesting at 2am outside the Meadow Meats processing plant in Laois.

Beef farmers from Laois and surrounding counties have vowed to continue a constant picket outside a Laois meat processing factory, until their concerns are heard.
Farmers are taking shifts at a peaceful protest at Meadow Meats in Rathdowney, 24 hours a day.
They started last Monday July 29. It is one of 16 protests around Ireland, with more promised by organisers.
The picketing farmers are asking any producers arriving with cattle to bring them back home.
The protest is over the low price farmers are getting .
Ratheniska farmer Enda Fingleton is the Laois County Chairperson and South Eastern regional chairman of the Beef Plan Movement.
He explains why they are protesting.
“As it stands, producers of beef are sending it to the factories at a loss. They are not achieving a living out of it. The price consumers are paying is way above what we are getting,” he said.
He said the farmer gets about 17% of the cost of beef .
“Some figures say the supermarkets get 55% of the value, others say the processor is pocketing the largest amount,” he claimed.
Mr Fingleton said that “anti-competitive practices” are driving down prices too.
“There is a four movement rule that just doesn't work. If a calf is moved four or more times between herds, the finisher gets cut. There is a 30 month rule too that cattle over 30 months are considered too old. It's nonsense. In other EU countries they prefer it. Older meat is higher in Omega 3 and certain breeds don't put on beef until they are older,” he said.
They are asking farmers not to sell their cattle during the protest until Meat Industry Ireland agrees to meet them for talks.
“We are asking any farmer to hold onto their cattle to allow us to achieve this. We are approaching them and many are turning around and bringing their cattle home.
“We ask the customers to keep buying beef but to ask their retailer how much the primary producer is getting out of the price,” he said.
“We will be here until Meat Industry Ireland sits and talks. The ball is in their court. They have not engaged on the isssue yet,” Mr Fingleton said.