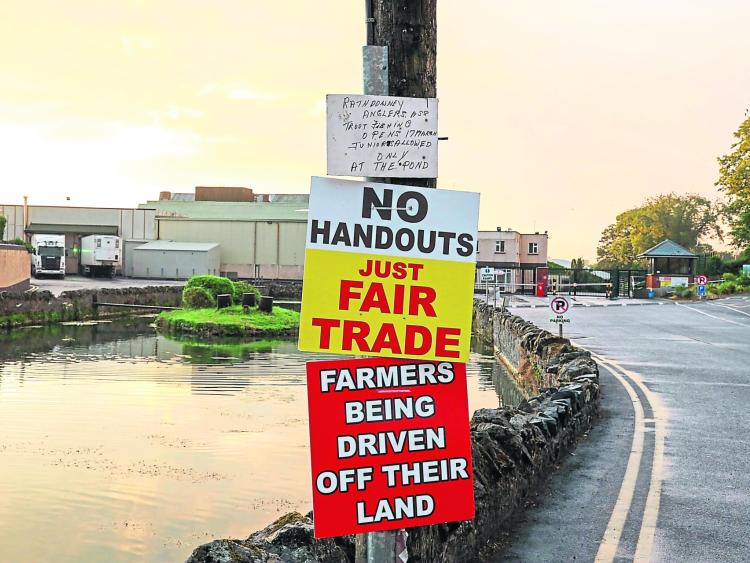 Farmers posters at the recent picket outside Meadow Meats in Laois

Cllr Padraig Fleming got the backing of his colleagues in his motion for Laois County Council to ask the Minister for Agriculture, to fix prices for beef farmers.
“We all know that beef farming has taken a major hit in the last few years.
“Motions have been passed on this in other councils as well.
“This is about rebalancing the margin in favour of farmers.
“It’s the factories and supermarkets that are getting more profits.
“Recent events have exacerbated this. Brexit and Mercursor could spell the death knell, particularly if there is no restriction on the type of beef,” Cllr Fleming said.
Cllr Tom Mulhall seconded his motion.
“I know beef hasn’t been profitable in the last few years.
“Last year was the worst. Farmers need to be supported, maybe more the smaller producer on land not suitable for tillage and totally dependent on beef or sheep.
“We are months from Brexit and no-one knows what will happen.
“The UK takes 45% of our beef. If we lose that, beef farming will get worse,” Cllr Mulhall said.
“In 2005 we lost the sugar industry. If we lose the farmers supplying the 40 or 50 steers a year, they are vital to the industry.
“Factories with feeding lots in Ireland will take out the small producer,” he said.
Cllr John King is from Rathdowney where farmers picketed Meadow Meats in the town.
“It is a very serious matter for the beef industry. The IFA has to stand up and be counted as well.
“Offal has a major role to play. There is only a quota for so many. If cattle are over a certain weight or age the price to farmers is cut.
“This €100 a head subsidy is only for some cattle. If it continues farmers will say they are better off having less quality animal to get a subsidy,” he said.
Cllr Noel Tuohy supported the motion also.
“Labour supports the small farmer,” he said.
The motion is “that Laois County Council contact the Minister for Agriculture to regularise the pricing structure to ensure that beef retail prices are distributed in fixed percentages to the entire supply chain to ensure that each of the links are protected from adverse pricing and also to ensure the sustainability of each of the links to ensure the protection of farmers and the prices which they get for their product”.

Sinn Féin Agriculture Spokesperson Brian Stanley welcomed the decision by the beef processors to sit down and talk in relation to beef prices and related matters.
“Beef processors need to recognise that it is impossible for beef farmers to produce at the current price they are being given. The economic reality is that the current price is unsustainable.
“Irish beef farmers must be given a larger percentage of the retail price.
“There are reports that some processors are paying an increased amount per kilo now than prior to the protests.
“ If these reports are true, then it is clear that there is a capacity there for processors to give farmers a fairer price.
“The onus is on the government to help resolve this matter as it is a crucial issue for rural Ireland.
“The Minister must face the reality that there is practically a monopoly of big players in the beef sector that are dominating how business is done – and that needs to end.
“Sinn Féin welcomes the beginning of the talks, it is vital that the talks are meaningful and we will be continuing to support beef farmers”