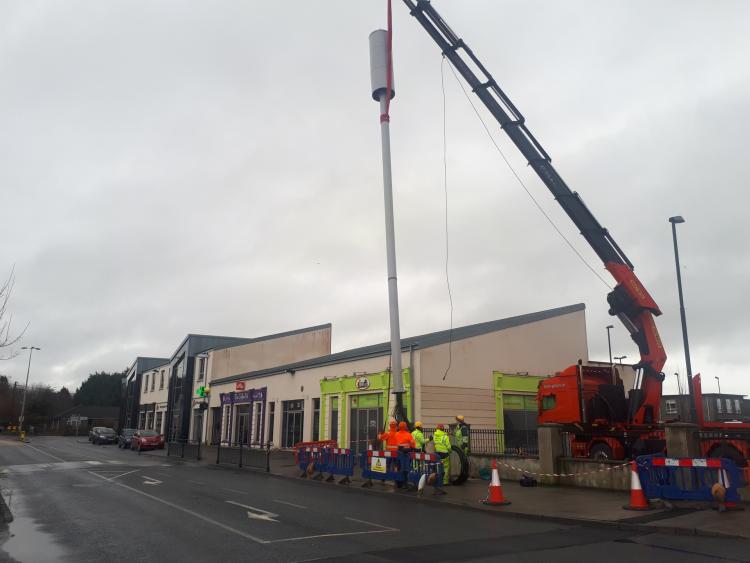 A Cignal tower being installed in Mountmellick, Laois last March.

A dozen new phone and broadband signal towers have been installed across Laois in the past 18 months by a company than plans at least seven more.

More will be built in Ballylynan, Mountrath & Rathdowney by the end of 2019 say communications infrastructure company Cignal.

The company says that their new towers are addressing coverage blackspots and will support the rollout of fixed wireless broadband to an estimated 30,000 people in those coverage areas.

It has invested €2 million in the telecoms towers in Laois, as part of its €25m nationwide investment programme.

The investment was announced at the Laois Chamber of Commerce’s launch at The Heritage Hotel in Killenard on Tuesday morning September 24.

Cignal listed the Laois companies it is employing as part of this county's rollout.

The antennae equipment is being provided by Laois manufacturer Alpha Wireless, in an initial half million euro contract. The design, planning and project management services are sourced from Portlaoise engineering practice Jason Redmond & Associates.

“As a Laois resident I am pleased and proud that it was the County we covered first," he said.

The company says it works closely also with Laois County Council to help identify where broadband is required and to avoid doubling up on other infrastructure. This is in line with the objectives of the Government’s Mobile Phone and Broadband Taskforce.

"Operator services are due to be rolled out over the coming months which will further enhance the services being offered. The new sites have made an enormous improvement to eir mobile coverage and customer experience in County Laois, with 4G outdoor geographic coverage estimated to be among their highest in Ireland at over 98.8%," the company said.

Antoinette Brennan is the Broadband Officer at Laois County Council.

“CIgnal’s investment is great news for the county. Over the past 12 months the company has worked with us to understand where we have been receiving complaints about poor mobile and broadband services, and then incorporating this feedback into its investment plans,” she said.

Martin Crowley is President of the newly formed Laois Chamber of Commerce.

“With the right communications infrastructure a business can be successful anywhere. The work Cignal is doing will help companies in the County to thrive and compete both nationally and internationally. Laois is sending out a strong message that it is open for business and investment, with vibrant and dynamic companies who prove that you don’t have to operate within the M50 to deliver world-class service.” he said.

Fergal Lawlor is the CEO of Alpha Wireless:

“We are proud to be a Laois based business that is exporting equipment all over the world. It is great to be part of this important investment project in our home county, which will see Alpha’s leading-edge technology helping improve Laois’s digital infrastructure,” he said.

“As a company based in Portlaoise it's fantastic to be working on an important engineering project that will help improve connectivity for businesses and households in the County,” he said.

Cignal says that that speeds of greater than 150mbps are now possible through mobile and fixed wireless broadband solutions, compared to 20mbps 5 years ago. It says that rural businesses that don’t have access to fibre, farm operations, people working from home or small start-ups can use video streaming, social media and other bandwidth hungry applications without lengthy buffering or loss of connection. It says that continuous investment is required given ComReg’s forecast that the demand for mobile data in Ireland will grow at an average of 32% per year up to 2022*.