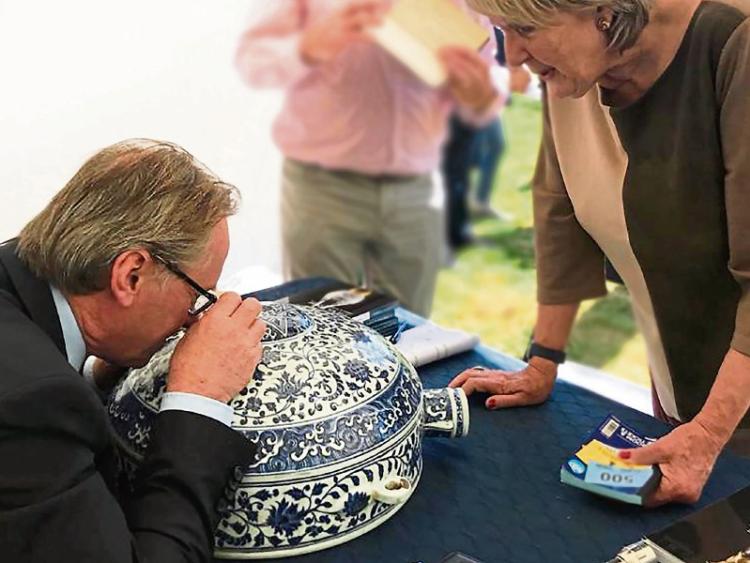 Philip Sheppard, Auctioneer is expecting a global bidding war for a Chinese vase at an auction in his Durrow auction room later this year.

Philip Sheppard has listed a Yongle period blue and white vase (1402 - 1424) at an estimate of €40,260 but he expects interest could drive the price well beyond the reserve.

Mr Sheppard discovered the piece at a charity valuation in Blarney Castle in Co Cork earlier this year.

“This family brought in a box with an important Chinese ceramic piece.

“It is an extremely rare early Ming (dynasty) blue and white flask.

“We were able to date it to the early 15th century Yongle period more or less the same age as Blarney Castle,” he told Laois-born broadcaster Claire Byrne on RTÉ Radio.

As to how much he expects it to sell for he said there is a 'conservative estimate of €40,000 to €60,00 but it could make multiples of that.

A similar piece of Chinese art was sold by Mr Shepperd in recent years well above its €1,000 estimate.

“It sold for €640,000. It was the highest price ever achieved at auction for an art object in Ireland.

“You never really know what is going to happen but this is already generating a lot of interest across collectors in the UK, the USA and in China,” he said.

The auctioneer said valuation is difficult because it is an extremely rare piece and there are unknown collectors.

He suspected there could be similar items around Ireland because of our close links to colonial Britain.

He said many pieces came to Ireland from Asia and the Orient in the past.

He is expecting buyers to fly from Bejing to Ireland just to bid at the Durrow auction in November.