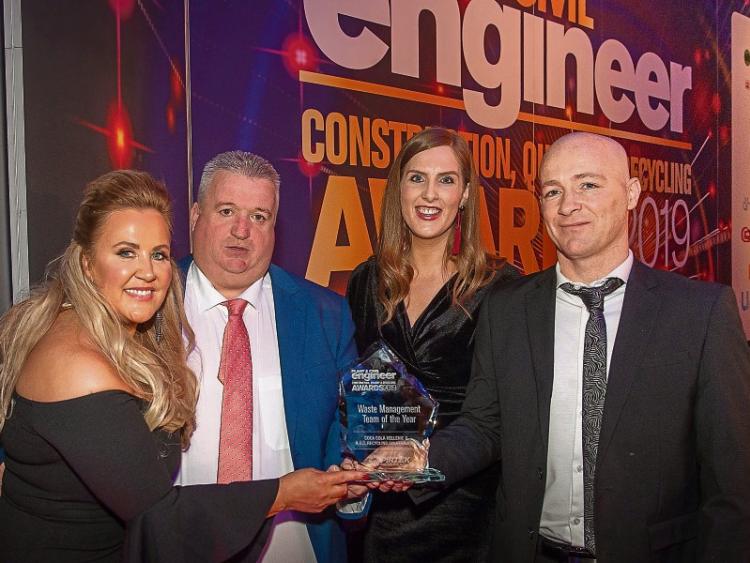 The team at ROC Recycling Solutions Limited in partnership with Coca-Cola Hellenic is celebrating after being named as one of the big winners at the recent annual Construction, Quarry & Recycling Awards.

Representatives of the partnership were presented with the prestigious Waste Management Team of the Year award, sponsored by Pirtek, during a glittering ceremony, compered by television and radio sports presenter Adrian Logan, at the Crowne Plaza Hotel in South Belfast.

Organised by the publishers of Plant & Civil Engineer, 4SM (NI) Ltd, it was attended by hundreds of guests and leading figures from the plant, construction, quarry and waste management sectors.

With 20 separate categories, the event is widely regarded as Ireland’s premier platform of recognition for those operating across all sectors of the industry.

ROC Recycling Solutions Limited was established in 2010 by Michael O ’Callaghan and Paddy Mc Bride as a waste management service provider to the commercial and industrial sector.

It is an Irish owned company headed by nationally and internationally respected professionals, with expertise in waste processing, brokering, and recycling.

A member of the 28-country Coca-Cola Hellenic Bottling Group (CCHBC), the business has a strong heritage in Northern Ireland and is a major employer at its state-of-the-art facility at Lisburn, Co. Antrim.

The CCHBC and ROC Recycling Solutions waste management partnership commenced in 2015 with the aims of improving the waste management systems to improve efficiency and enable greater segregation, developing an on-site waste processing self-sufficiency at the Knockmore Hill facility, attaining closed loop recycling on recyclable wastes despatched from the site and achieving in excess of 80% recycling with balance of tonnage undergoing recovery.

As the waste management partner, ROC Recycling and CCHBC engage on an almost daily basis to ensure that there is ongoing support and commitment to those CCHBC corporate waste targets and goals.

Last year, although it generated nearly 2,000 tonnes of waste, in partnership with ROC Recycling, it achieved zero waste to landfill.