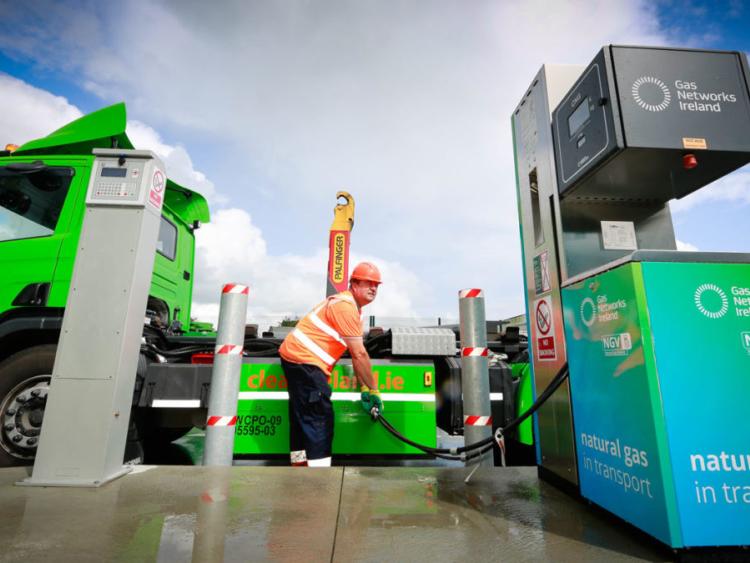 Applegreen at the Midway to get CNG fuel pump

Portlaoise is one of the first locations in Ireland to get a natural gas truck refuelling stop, as part of a drive to cut the high carbon emissions from transport.

A new Portlaoise service station is set to include one of the first natural gas pumps for gas powered trucks.

The two stations are on the M7 motorway, at the Midway, Portlaoise at exit 17 and at junction 27 in Birdhill, Tipperary.

Gas Networks Ireland (formerly Bord Gais) is behind the Causeway Project, an investment worth over €2m, to offer CNG to power trucks for businesses to reduce transport costs and emissions.

Construction on the project will get underway this summer with both stations expected to be in operation by the end of 2020.

John Lowry from the company outlined their plans at the Laois County Council meeting in January, where he was quizzed on the safety by a councillor.

He noted that 20% of greenhouses gases emitted in Ireland comes from transport energy, and almost a third of that is from trucks and buses, which can be replaced with CNG fuelled vehicles. Vehicles heavier than 3.5 tonnes are too heavy to run on electricity according to the ESB he said.

The company plans to eventually pipe in biogas generated from rotting waste and farm waste in Anaerobic Digesters, a fully carbon neutral option for transport.

He said that there are only 35 new trucks running on CNG in Ireland but "we expect 150 to 200 trucks on the road this year".

"Excise duty is frozen until 2024 and we have asked for an extension. We have been told that if the duty on gas goes up, the diesel will go up too," Mr Lowry said. He said the gas trucks will also get a toll charge reduction.

"This is a great opportunity for Laois to be pushing forward. It's in a great location because of the new industry in the locality," he said, mentioning Glanbia and An Post as potential customers.

Cllr James Kelly noted that natural gas is still a fossil fuel, and is largely the combustible gas methane.

"In case of accidents it would be a serious issue on the M7," he noted.

Mr Lowry said they will discuss a plan with Laois Fire Service but reassured them that with no oxygen in the sealed gas pipe network that it could not ignite.

"CNG tanks are almost bomb proof. If there was a leak it is lighter than air so it would go into the atmosphere. We would sit with Laois Fire and discuss steps if there was an accident involving a CNG truck," he said.

He added that Government support has been slow.

"The gas Minister is the Minister for Housing. They don't want to hear anything about energy. We want to get the climate action Minister to support us," he said at the January council meeting.

Cllr Padraig Fleming asked what it cost to convert trucks to gas, but Mr Lowry said it is not possible to retrofit or dual fuel.

The Causeway Project is grant aided by the EU’s Connecting Europe Facility Transport Fund and the Gas Innovation Fund.  Research is co-funded and conducted by the National University of Ireland Galway.

Fuel prices are set to rise