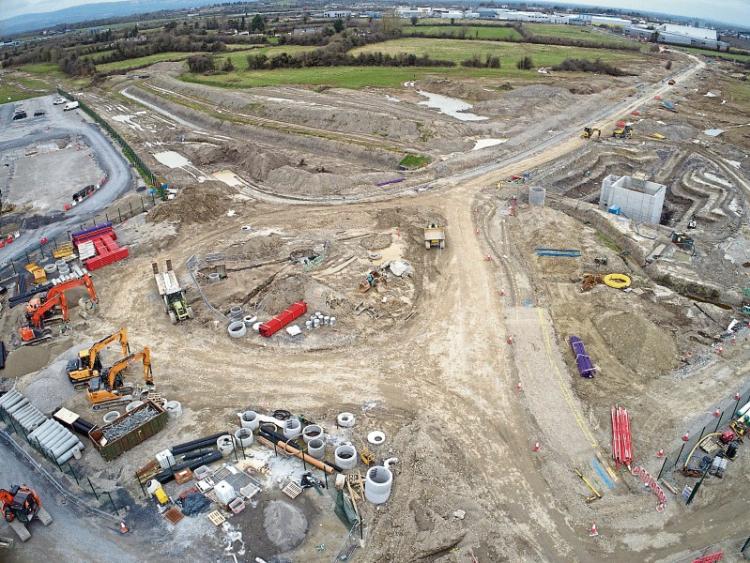 Portlaoise in Laois is scheduled to get a €7 million investment in new and existing roads this year.

Half of the money will come from Laois County Council's own budget and income to build a €3.5 million road from Clonminam to the new enterprise park  next to the M7 Motorway in Togher.

Also planned is the resurfacing of the Stradbally road and James Fintan Lalor Avenue, and reconstruction work on the Abbeyleix Road.

The road to Togher (pictured) was already well under construction before Covid-19 restrictions brought it to a temporary halt.

The 1.2km road will run from the J17 National Enterprise Park to Fr Browne Avenue near O’Moore Park GAA grounds.

Laois County Council’s Director of Services Simon Walton says it will be finished on time despite the delay.

“Work is currently suspended due to Covid 19 public health requirements. Nonetheless we are still confident of an Autumn 2020 completion date,” he said.

The new enterprise park beside the M7 has an number of business sites already under construction. These include the Glanbia cheese factory and the Supermacs motorway stop. Between them they are expected to create over 200 new jobs in the county town.

The new road will have footpaths, cycle tracks, three new roundabouts and a drainage system. Construction is by Wills Bros. Contractors.

The council hopes it will boost economic growth.

“The new Distributor Road compliments previous investments made by Laois County Council to incentivise economic development in the area,” the council said in its roads budget report for 2020, approved at the March council meeting.

A further €2.3 million Transport Infrastructure Ireland (TII) grant has the green light for a major upgrade of the N80 Stradbally road from the Parish Church to Ballymacken.

A final grant of €910,000 will be given, also by TII, to finish paying for the recently completed Southern Circular Route Extension designed to take heavy traffic from the town centre, and now also popular as a new walking route for locals.

There is a further €900,000 from the TII for a road reconstruction and revised road layout scheme along the N77 Abbeyleix Road from Junction 17 at the motorway to JFL Avenue roundabout. Designers will be appointed for this scheme shortly said the council.

That road is also allocated a further €20,000 from the TII for safety enhancement work at a location where there is a high number of collisions.

Another €2 million from the TII will be shared between JFL Avenue in Portlaoise and roads in five other towns. That fund is for resurfacing schemes to make roads more skid resistant.

The other locations are Graigue in Mountmellick, Main Street Ballylinan, Coolcorberry in Durrow, Castletown and Colt in Abbeyleix. In total over €27 million will be spent on Laois roads this year.

The other major roads project in the county is the completion of the N80 Maidenhead Realignment Scheme, to straighten bad bends on the road to Carlow.

It is due for completion in Autumn, with €3.4 million made available to finish it.