Photographers and Videographers across the Republic of Ireland are seeking a time extension to the pandemic unemployment payment for those who cannot return to work or those who will be unable to work in the short to medium term.

Those affected include sports, family, music, wedding and event photographers and videographers.

In a survey conducted by the Irish Photographers and Videographers Association (IPPVA), 780 professionals across the sector outlined their main concerns and worries as the first of five phases of recovery came into effect.

Of the respondents surveyed 62 per cent have had to close their business completely since the virus outbreak, with 31 per cent operating on a scaled-back level. Effectively 90% of the industry has seen a 75% or more drop in revenue and two thirds of the industry have had no revenue at all since the outbreak began.

The main concerns outlined by respondents are cash flow and liquidity (83 per cent), the lack of clarity on how photographers and videographers can operate legally and safely (80 per cent) and 56 per cent are concerned about their ability to operate under current health and safety measures.

The president of the IPPVA, Kevin Kheffache, has expressed his concern for the future of his members amidst the uncertainty of Covid-19. “Whilst we fully support the actions of the government and agree with them for safety of our members and the public, the impact that it's having on our members is catastrophic and our concern is that the inability of our members to work at present and future will have a major impact to the sector.

“As the economy begins to reopen and the nation opens up, we’re calling for a time extension to the Covid-19 Pandemic Unemployment Payment, specifically for those who will be unable to return to work until much later in the year.

“The majority of our members are self-employed and in the case of professionals who support the portraiture, press, commercial and wedding industry it is very unlikely that they will be allowed to work in social settings at any meaningful level in the short to medium term.”

89% of those surveyed believe that a time extension of the payments would help keep photographers and videographers financially supported over the next 3-6 months.

Over 60 per cent of respondents have not received any revenue since the outbreak of Covid-19 in Ireland, and over a half (55 per cent) expect to continue dealing with a decline in their revenue for at least the next months, if not longer.

In its 71-year existence, the members of the IPPVA have never been faced with such difficult circumstances. As with all sectors in Ireland it is hoped that by adhering to the government restrictions and with enough clarity and support that photographers and videographers across Ireland will be able to recover their businesses and resume capturing some of our nations most cherished moments in the very near future. 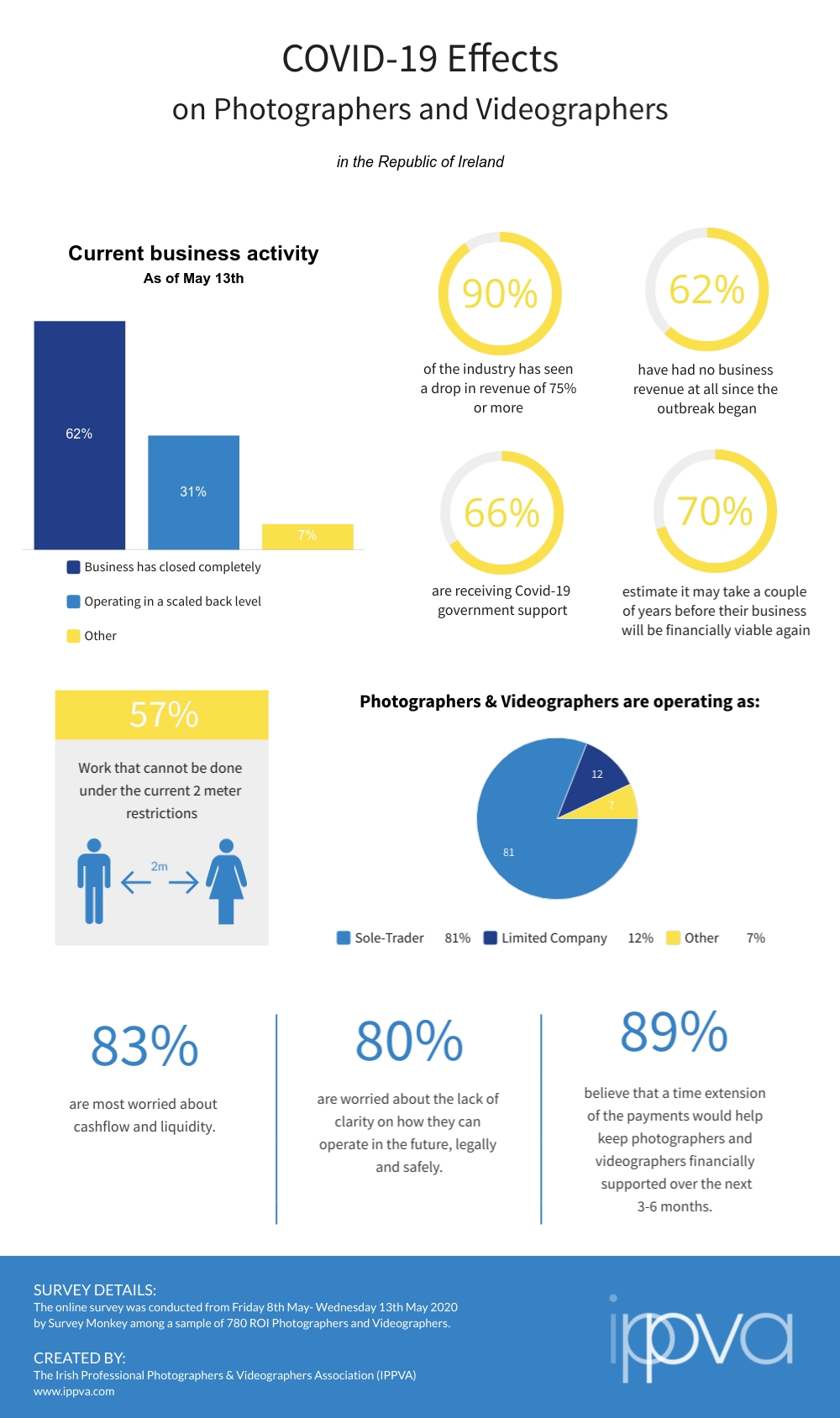