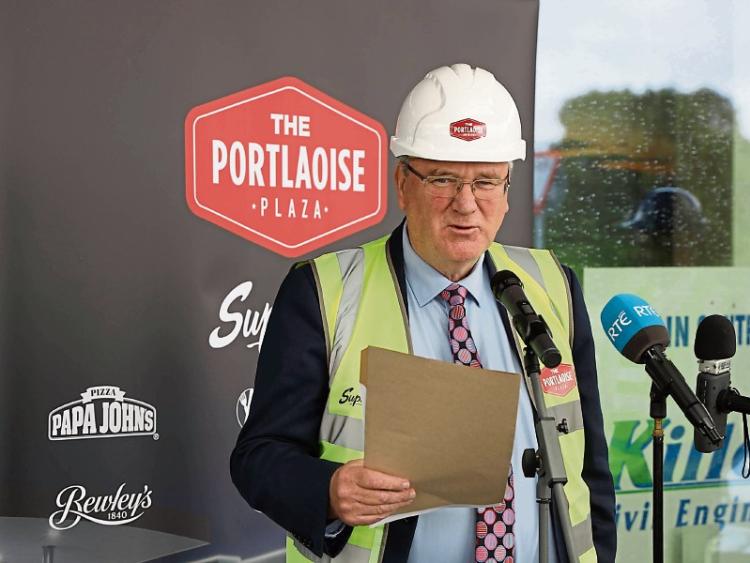 Pat McDonagh speaking at the opening of the Portlaoise Plaza. Picture: Alf Harvey

“When you are going through hell keep going.”

Pat McDonagh borrows a phrase from none other than Winston Churchill as to why he decided to push ahead and open the new Portlaoise Plaza this week in Portlaoise.

The boss of the fast food chain Supermac's has picked an extremely challenging business environment casued by Covid-19 to open what will be the biggest motorway stop in his chain of plazas in Ireland.

“From the time we started to plan it to the opening of it a lot of water has ran under the bridge and circumstances have changed dramatically which no one could have foreseen. But when you half way in, you're better after that to keep going. We are better off to open it because otherwise you if you didn't it would go on the long figure, we probably wouldn't open it until this time next year or maybe next spring or whatever,” he said.

“Look, we're optimistic. Things have improved over the last couple of weeks. There are more people on the roads and more people out and about.

“I suppose it's (Covid) something we have to adjust to in the new way of living so I'm quite happy that we are ready to open by the weekend and optimistic that it will work well.”

Trading since the late 1970s, Mr McDonagh has seen many ups and downs economically. So does this make him more level headed in terms of how you approach a new venture even in the teeth of a storm?

“Yes, but no matter how many swings and roundabouts or recessions you've gone through, it couldn't prepare you for this because this is the mother and father of all situations. First of all it involves peoples health which is the main thing. And secondly there is the uncertainty it creates and the difficulty that it is very hard to plan and project what is going to happen ahead especially in any touristy related venture which this is a part of. There are no events or games in Croke Park or concerts on in Dublin or whatever which would be a big part of it as well.

“You have to be of the mindset that things will improve and it's a temporary blip. And you've just got to plough ahead as you would with much more or less restrictions in relation to dealing with Covid crisis and obviously have less customers than you would normally be hoping to attract,” he said.

Mr McDonagh has invested heavily in the new M7 Plaza where he will employ 120 people. He also owns the Killeshin Hotel and opened Supermac's on JFL Avenue in 1995.

It is a real endorsement of Portlaoise to do business. So what does one of the most sucessful people in Irish business think about the town's potential.

“I've always said that Portlaoise is a kind of a meeting place of Ireland and that's what we hope to continue to invest in.

“Portlaoise is very easily accessible from all parts of the country and that's a big plus for it. With what's happening now it's even going to make it more so, going down the line as a meeting place.

“I think that with people working, I would see an opportunity as well. Sometimes you have to change your plans to suit the demands that are out there.I would see that it could be a meeting place for people from Dublin coming to meet people from Cork or Limerick or the midlands or wherever,” he says.

He is considering putting this in to action at the Plaza, parts of which he may repurpose.

“For people that are working from home I am looking at setting up a hub where they can rent a desk for an hour a day or a week or a month that is going to be convenient, affordable and where you will meet people of a similar mindset as well, so that you can collaborate with them.

“I think it's going to be the next move because obviously you have to adjust to whatever the demands of the customer are.

“We have a few meeting rooms upstairs and we'll convert a couple of them into kind of hubs if you working from home or you want to meet up or use high speed internet,” he says.

He is happy to work with others to grow Portlaoise's reputation as a meeting point.

“I think people that have been commuting to Dublin each week and spending an hour and a half each day getting into the city centre or whatever could now look upon a situation where that's going to change and they might only get to Dublin once a month a week or whatever.

“And here's why I think there is going to be a need for a facility like this, whether we call it an IT hub or whatever.

“That's something I think we will give serious consideration to and we will work on it over the next couple of months,” he says.

The opening of a new Glanbia plant near the new Portlaoise Plaza is for him another sign of Portlaoise's emergence.

He says he is aware of a few other businesses who are looking at locating in Portlaoise.

So where does he place it as a town compared to the others where there are Supermac's outlets?

“I suppose what has happened to the country is that pretty much the county towns in most counties have developed and to the detriment, to a degree, of some smaller towns.

“Portlaoise is up there with the best and because of its location - I think it is probably ahead of most. It has a lot to offer. There are lots of good hotels and good businesses overall in Portlaoise. Considering we were in a recession ten or twelve years ago, Portlaoise has really mushroomed.

“I think there's good leadership there as well as from both the Council and the Chamber of Commerce and other organisations. So all these things help and give it a brand and the brand is very impressive and favorable in the public eye. And it's difficult to develop a brand and get a reputation for it. When you have it you have to mind it,” he says.

He is proud to have his three flagship businesses operating in Laois in the shape of Supermac's outlets, the Killeshin Hotel which is part of the So Group of hotels, and now the Portlaoise Plaza. He knows there will be difficulties ahead.

“They are going to face challenging times because tourism is probably one of the worst affected sectors by Covid. It's about sustaining the business or the next 12 months because there won't be any foreign tourists, weddings or meetings so you have to develop the local business so food and beverage is going to become very important.

“Hopefully as we progress through this Covid crisis a vaccine will be found It'll take quite a while to come back to any form of normality. So at the moment it's probably adjusting to the new rules and regulations and the new business environment,” he says.

Many Irish people probably look up to someone like McDonagh because he has built from one outlet in Ballinasloe in 1978 to having one of the biggest businesses and best known brands in Ireland.

So what would he say to all the small businesses that are facing uncertainty.

“It's like anything, you have to adjust to where you are and take a note of where you are in business. I honestly believe that small and medium sized business are what is going to bring this country back.

“When you're a small business sometimes you feel very isolated. And it's a fairly lonely place to be. So, you have to depend to a large degree on yourself for your own motivation.

“Sometimes you have to make tough decisions and sometimes the earlier you make those decisions even though they are hard ones, the better for the business going forward. Again you have to reassess where you are? Where the business is? What's the future like? Where can you adapt your change?”

Thousands of Irish people found their way in the jobs market thanks to Pat and his wife Una McDonagh. Many of his employees are young people.

Mr McDonagh says young people in general have a lot to offer and he urges them to remain self-motivated. Regardless of the Covid-19 crisis, he urges them to “follow their dreams” but also “work hard at it.”

His key piece of advice to the young people is something that everybody can follow.