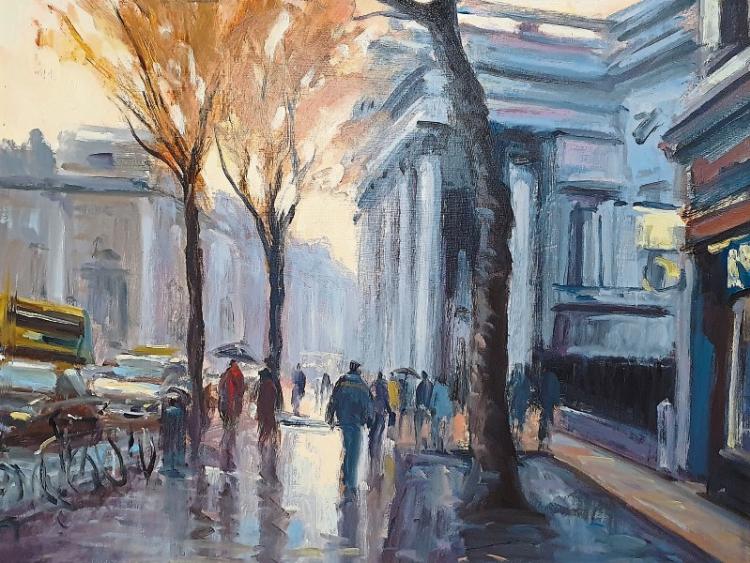 Online is the norm now for auctions and Sean Eacrett is a classic example of how auctioneers have pivoted over the last year.

A massive collection of fine art, antiques and collectibles will be available to bid online on March 26 and 27 next.

Hailing from a collector in Portarlington, the fine art has good provenance from the artists themselves.

The lots include ten signed Con Campbells including lot 1134 A Hare est €300 - €500 average for each, all directly from the artist.

Contents of five houses featuring hundreds of antiques, including up to 40 wool carpets, 30 mirrors, furniture from an 18th c up to the present day including a provincial hall chair Lot 1875 est €60-€70 could make a lot more.

This massive auction is a treasure trove for antiques hunters, with highlights including an 18th century padfoot mahogany dropleaf table lot 1875 est €400-€600.

Perfect for the lockdown laptop philatelist and comic speculator.

For those who enjoyed ‘The Beano’ or ‘Judge Dredd’ in student houseshares, it is now intriguing to see such terrific examples of graphic art turn up and sought after in auction houses.

Many of them have found their way to Seaneacrettantiques.ie for his March 26 and 27 online only auction. (easyliveauction.com)

Dennis The Menace, Gnasher and Billy Whiz, all heroes of the pages of ‘The Beano’ are available for budding fans here in a series of collections.

Their appeal is enduring as exemplified by later Beano series from the 2000s, featuring in lots 198 to 290.

The auction also features numbers of ‘The Hotspur’, something of a boy’s own favourite, featured Dozy Danny and Johnny Jett, it was published from 1959 to 1981.

And for frustrated football dreamers, the auction includes 60 copies of the classic Roy Of The Rovers, of Melchester Rovers from the years 1970 – 1990, all available in lot 390.

For those who were students in the 1980s, the comics of Judge Dredd were a staple of the male bedsit.

The same students, now more likely to be aficionados of the Antiques Roadshow can flex their fingers and bid for some gems via their keyboards.

A selection of collectors favourite toy cars should attract interest; the provinance is good as they came from a third generation hardware shop and are in good condition.

Also of interest could be vintage Meccano, Moto Trix and Scientifix all boxed in lot 87.

For the professional or indeed amateur philatelist, this auction could be a goldmine.

Thousands of international and vintage stamps are included in hundreds of books from a retiring collector, are also going up for auction on March 26 and 27.

Each book contains 16 or so pages of stamps in perfect condition, from late nineteenth century to the present day.

Sean Eacrett has hosted auctions for a number of film sets including Into The Badlands, The Vikings and Penny Dreadful.

You cannot have movies without their ads and fans of movie posters should pay serious attention to this auction.

Sean has no less than 313 lots containing at least five film posters each, estimated at €50-€80 a bunch.

Finally, this pandemic lockdown must-have is a bicycle and Sean Eacrett’s March 26 and 27 auction is just the pace for a potential peddler.

Lots 161 - 179 features a wide range of bicycles estimated from €50-200 with many in good condition as they came to him from a shop that was sadly closing down.

Auction: Online only at easyliveauction.com