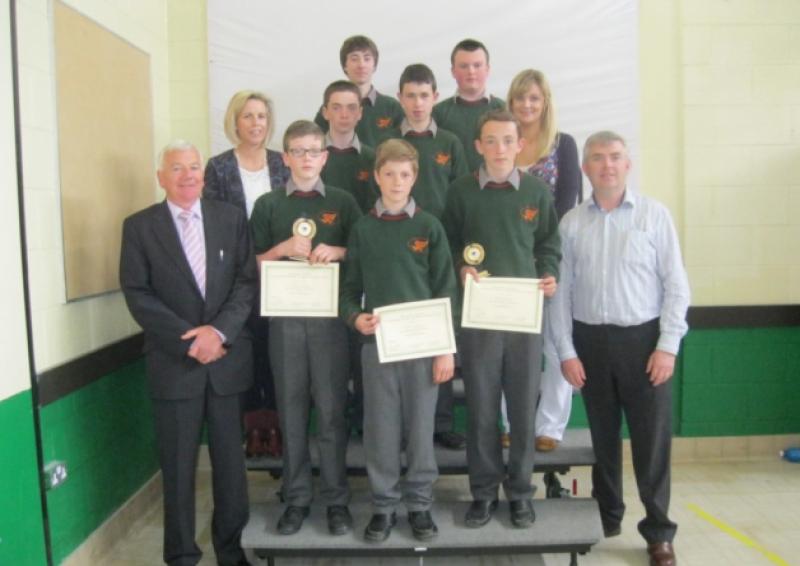 St Fergal’s College held its first ever Enterprise Week organised by Ms Hogan and Ms Phelan from February 3 - 7 this year where the Manor Stone Entrepreneur Competition was launched.

St Fergal’s College held its first ever Enterprise Week organised by Ms Hogan and Ms Phelan from February 3 - 7 this year where the Manor Stone Entrepreneur Competition was launched.

Judging took place all day on the Thursday May 1. The judges were Mr Tom Hennessy, MD of Manor Stone, Mr Jim Kells, MD Midland Environmental Services and Ms Anne Goodwin, Laois Partnership Co. There were 18 junior entries and 12 senior entries, a total of 70 students entered the competition and attended for interview.

On Monday May 19 at the awards ceremony all 70 students were presented with certificates of participation and the winners of each category were announced. Mrs O’Neill, principal thanked the Hennessy brothers of Manor Stone and Jim Kells for their very generous sponsorship.

Congratulations are extended to all the students who participated and it is hoped they will use what they have learned to benefit them in the future. The prizes were divided into two categories.

The winner in the junior category was Matthew Murphy for his an Insulin Pump app project.

On the senior side first prize went to a team made up of Sophie Hanrahan, Aoife Keane, Adam Hanlon and Matthew Mc Nulty for their project ‘Gloss Co’ - a business glossary.