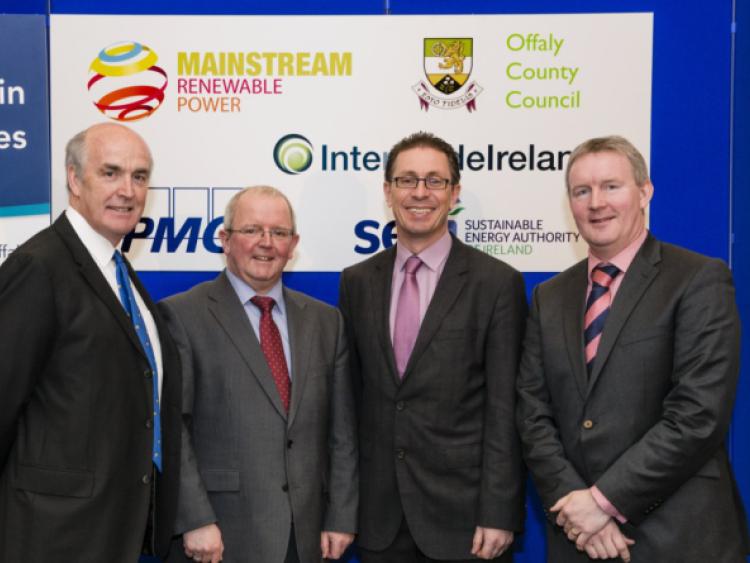 Windfarms in the midlands could lead to major job creation , according to several speakers at a wind energy conference in Tullamore last week.

Windfarms in the midlands could lead to major job creation , according to several speakers at a wind energy conference in Tullamore last week.

The conference – Energy Bridge: Supply chain opportunities for Irish business – was hosted by Offaly County Council, in association with Mainstream Renewable Power. It attracted exhibitors and companies from China, UK and across Europe.

“A lot of skills are going to be required. A lot of electricians are out of work. Those electricians will have to move from commercial and domestic sectors to high voltage. Training courses will have to be put in place. There’s a lot of work there. There’s five years’ work there. “There aren’t enough of them and training will also have to be provided. It is something that FAS needs to have a look at,” he said.

“Over a five to eight-year period that could mean a total investment of about €550m in the region,” he said.

Cllr Johnny Butterfield said there was “civil war” brewing with people concerned about noise and the environmental impact on their land. “What are the effects on the local community? Have confidentiality clauses been put into contracts? We also need to know the lifespan of turbines,” he said.

Diarmuid Twomey, Irish development manager with Mainstream Renewable Power said their consultation period would run until 2015 and they are available to meet every person from areas where turbines will be placed. “There has been a lot of scaremongering,” he said.