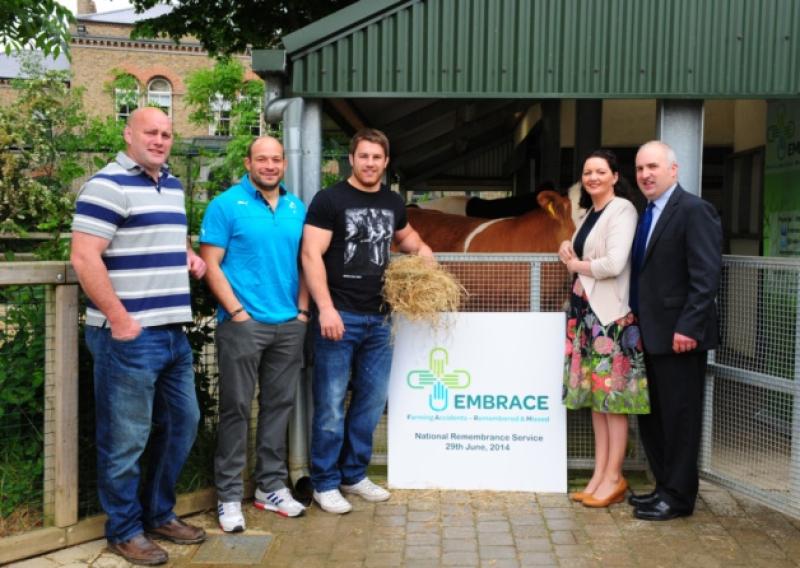 The death of a loved one on the family farm has led to a Laois family organising an ecumenical service for all those who have died in farm related accidents across the 32 counties.

The death of a loved one on the family farm has led to a Laois family organising an ecumenical service for all those who have died in farm related accidents across the 32 counties.

The organisers behind the service are Brian and Norma Rohan who felt the need for such an event to remember all those who died in farm related deaths after Brian’s dad, Liam was killed in a farm accident, in June 2012.

The event, to be held in Abbeyleix on June 29, will remember all those who have died in farm accidents across the 32 counties with a number of high-profile rugby players to read out names of those who died on farms from the four provinces.

“Farming remains the most dangerous job in the country. I have been in contact with the HSA and they have told me that almost 200 people, adults and children, have been killed in Ireland in the past 10 years in agriculture and farming related accidents,” Brian explained.

“In honour and remembrance to these people my wife and I are organising a national inaugural remembrance service for the families of those killed in agriculture and farming accidents. This is the first time that such an event will be held. We have formed a support group called Embrace and following this event, we hope to grow Embrace as a support group to those affected by accidents in the farming community. I have huge and positive support from the HSA and the IFA, and many other rural and agriculture organisations,” he added.

He outlined that the HSA Chief Executive is fully backing what they would like to do and are in the process of figuring out how to contact the 200 families on their behalf. The Taoiseach and Minister for Agriculture have been invited and both have indicated that they would like to attend. A number of international rugby players from each province have agreed to be ambassadors for the event and Rory Best, Sean O’Brien and John Hayes lent their support to the recent press launch.

Brian’s father died following an accident on the farm in Shanahoe when he was 74. He had been fully active on the farm and his death occurred poignantly only days after Brian and Norma had just had a baby. “We had a great working relationship. Like any family we had the odd row but we always got on very well,” Brian said.

While the Rohan family pulled through the tragic event Brian felt at the time that a support group was something that was badly needed which could give advice and support at such a difficult time.

Tragically, 14 people have already lost their lives this year in agriculture and farm related accidents. Farming is deemed to be the most dangerous occupation in Ireland with the young and old most vulnerable to injury or death.

Despite the large amount of such deaths, there are no support groups for families affected so significantly by such deaths. The idea for the service and support group came about when Brian and Norma were watching a piece on Console, the national suicide prevention organisation, on television toward the end of last year and Brian felt something similar was needed to tackle farm deaths.

Having being inspired by the programme, they began work in January and were assured of support from the HSA and IFA when they contacted them.

“They rowed in behind us and were fully supportive,” Brian said.

A number of large companies have come on board such as AIB and Glanbia and many have pledged financial support for the event in Abbeyleix and the support group.

“My mother, Bridie, who is alive and well, said if we could help just one family or one person get through a personal tragedy like we did then it would be worthwhile. If through our efforts we could prevent one accident then that would be a big help,” Brian said.

A man from Northern Ireland who knew the late Liam through their attendance of various ploughing events only recently learned of Liam’s death. It turns out that he lost a son in a farm accident in 1982 and he is very keen to attend the event. This man’s son had two passions, farming and rugby, so Brian said they are delighted to be able to host such an appropriate event where people can remember loved ones.

Brian said the Embrace organisation is one which doesn’t want any new members, as any new people volunteering or seeking assistance will most likely mean that another family has been touched by a farm tragedy. Instead they want to try and make people more aware of the dangers posed on farms and for those involved in agricultural activities which can cost lives or cause serious injury.

One particular challenge will be changing the mindset of the elderly farmer, Brian said, to get them to be more safety conscious.

However, to get their message across to the younger members of the farming community, social media such as Facebook and Twitter have been harnessed. The backing by such high profile rugby players from the farming community will also be of big assistance. John Muldoon, the Connacht captain will also attend the event. The event also particularly struck a chord with Rory Best as their promising young team-mate, Nevin Spence, was one of three family members killed in a slurry accident on their farm in county Down in 2012.

The remembrance service will be held on June 29 in Abbeyleix, Laois, at 2pm. It will be an ecumenical service in the Holy Rosary Catholic Church. There will be tea and refreshments afterwards in a local hotel with a number of keynote speakers. The finer details of the service are being finalised.

“We will also be remembering those who have survived serious accidents at the service and to create more awareness of farm safety especially as the national schools get their summer holidays. The aim is to develop this event into an annual remembrance and for Embrace to develop various support structures to hopefully help families in any way possible come to terms with the irreplaceable loss of their loved ones,” Brian said.