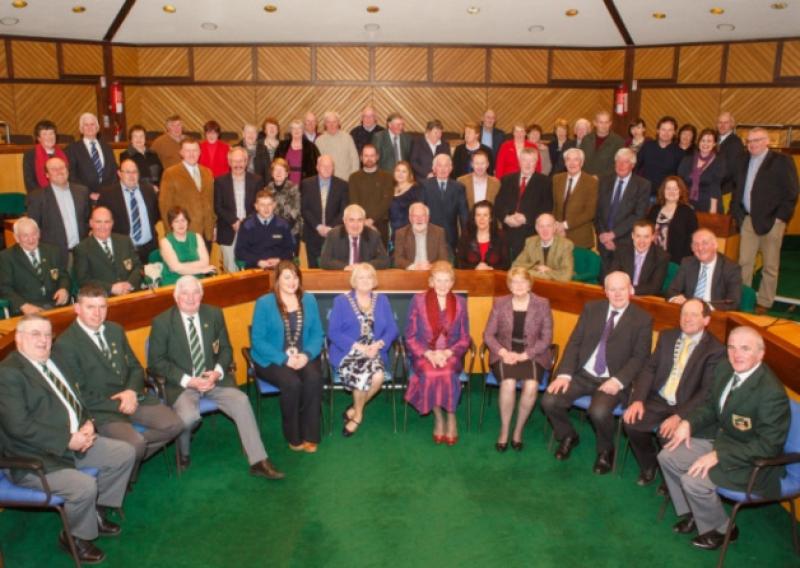 Particular praise went to Anna May McHugh, for the huge success of the National Ploughing Championships, held in Ratheniska last September.

A certificate of achievement was presented to the NPA chairman James Sutton, and a beautiful piece of Genesis in the shape of a horse and plough was given to Anna May. Many locals filled the chamber and they were joined by NPA members from all over the country. These are the people who pool their ideas that make the Ploughing Championships happen, Anna May told the audience. The Ballylinan woman , is is also the Leinster Express Laois Person of the Year, thanked all involved with the event, which returns this year.

“Being a Laois person, this is a wonderful honour. This year, Laois will have hosted the event for the 6th time, out of 83 years, which is not bad going. The event has grown beyond all our expectations, from the horse plough to the tractor plough to reversible ploughing. May God speed the plough,” she said..

Cathaoirleach of Laois County Council Mary Sweeney said that the event was a resounding success, bringing 228,000 spectators to Laois over the three days.

“On a personal note, I have huge respect for Anna May McHugh, she is an inspirational lady. If we aspired to have more ladies like her, we would have a far better country than what we have now”.

Mayor of Portlaoise Town Council Cllr Willie Aird told the crowd that the event couldn’t have taken place without the support and enthusiasm of the  local community.

He also praised the organisation of the event, and Anna May in particular who he said was always positive and enthusiastic.

Leas cathaoirleach of Mountmellick Town Council, Cllr Lisa Delaney said: “if Anna May was to run the country like the ploughing, it would be a very well run country”. She commended the NPA for their work and hoped they would go for a hattrick in Ratheniska.

County manager Peter Carey said that he was proud Laois hosted such a successful event, and paid tribute to all agencies involved, as well as the landowners and the local community.

“Ratheniska can be very proud. The essence of this event is community and the friendships,” he said.