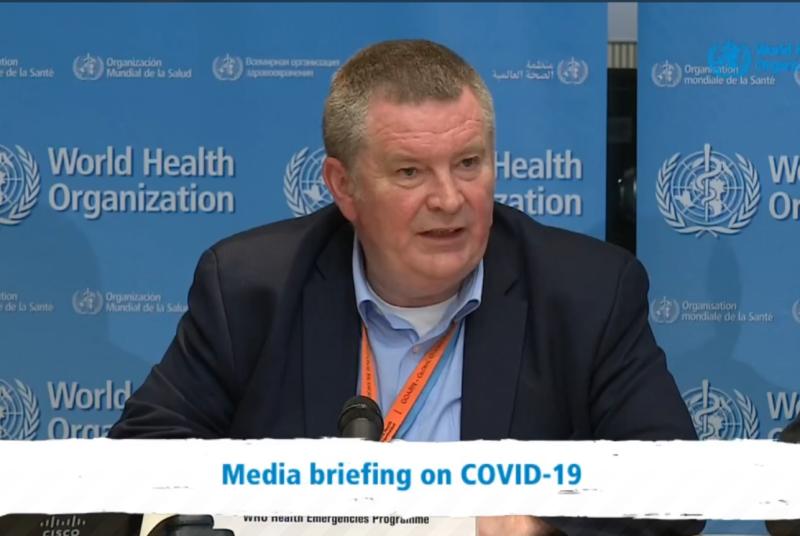 The World Health Organization has said Ireland's response is 'coherent' but encouraged health officials here to involve community organisations in helping to trace people with the virus while also questioning the disinvestment in public health medicine in Ireland and other countries.

During the press conference in Geneva where WHO announced that the Coronavirus is now a pandemic, they were asked by an Irish Independent reporter if Ireland was doing enough to combat Covid-19.

Dr Mike Ryan, Executive Director of the WHO Health Emergencies Programme, replied on behalf of the organization. The Irish man from Curry, on the Sligo/Mayo border, has been involved in previous efforts to control SARS and the Ebola virus.

"I think Ireland has demonstrated through the HSE, the Health Surveillance Protection Centre and the office of the Chief Medical Officer a very coherent response under the leadership of the Minister of Health and the Emergency Committee which has been a good all of the Government structure.

"I believe Ireland is finding that balance between one or measures aimed at chasing the virus and aimed measures aimed at creating enough social distance to suppress the transmission of the virus. I think the concerns you have an Ireland may be more related to the capacity of the system to cope with a surge of cases in the hospital system and I think all countries in Europe are concerned about that right now.

"But the again looking at the overall strategic approach in Ireland we would say that it is a comprehensive strategy and we are ready in WHO to offer any technical advice and assistance said that's needed.

"Speaking with the Italian Government last night they were very much going to use their community organisations to leverage and improve contract tracing. So maybe in Ireland and others seeing who we can rapidly amplify the impact of public health officials by using communities, public health and others would maybe be an option but obviously that is for Dr (Tony) Holohan (Irish chief medical officer) and others to decide.

Dr Maria Van Kerhove, Infectious Disease Epidemiologist; MERS-CoV Technical Lead at the WHO Health Emergencies Programme, said questions must continue to be asked of the response in Ireland and other countries.

"These questions of are we doing enough? Are individual countries doing enough? These are the right questions. Each country needs to look at what they're doing how well they are prepared - identify the gaps in their preparedness in terms of their actions and take action on that. It isn't a one size fits all as we've been saying but asking the question are we doing enough regularly and repeatedly is really critical," he said

In the past two weeks, the number of cases of COVID-19 outside China has increased 13-fold, and the number of affected countries has tripled.

Thousands more are fighting for their lives in hospitals.

We have therefore made the assessment that COVID-19 can be characterized as a pandemic.

Pandemic is not a word to use lightly or carelessly. It is a word that, if misused, can cause unreasonable fear, or unjustified acceptance that the fight is over, leading to unnecessary suffering and death.

And we have never before seen a pandemic that can be controlled, at the same time.

WHO has been in full response mode since we were notified of the first cases.

And we have called every day for countries to take urgent and aggressive action.

We have rung the alarm bell loud and clear.

Of the 118,000 cases reported globally in 114 countries, more than 90 percent of cases are in just four countries, and two of those – China and the Republic of Korea - have significantly declining epidemics.

We cannot say this loudly enough, or clearly enough, or often enough: all countries can still change the course of this pandemic.

If countries detect, test, treat, isolate, trace, and mobilize their people in the response, those with a handful of cases can prevent those cases becoming clusters, and those clusters becoming community transmission.

Even those countries with community transmission or large clusters can turn the tide on this virus.

Several countries have demonstrated that this virus can be suppressed and controlled.

The challenge for many countries who are now dealing with large clusters or community transmission is not whether they can do the same – it’s whether they will.

Some countries are struggling with a lack of capacity.

Some countries are struggling with a lack of resources.

Some countries are struggling with a lack of resolve.

We are grateful for the measures being taken in Iran, Italy and the Republic of Korea to slow the virus and control their epidemics.

We know that these measures are taking a heavy toll on societies and economies, just as they did in China.

All countries must strike a fine balance between protecting health, minimizing economic and social disruption, and respecting human rights.

WHO’s mandate is public health. But we’re working with many partners across all sectors to mitigate the social and economic consequences of this pandemic.

This is not just a public health crisis, it is a crisis that will touch every sector – so every sector and every individual must be involved in the fight.

I have said from the beginning that countries must take a whole-of-government, whole-of-society approach, built around a comprehensive strategy to prevent infections, save lives and minimize impact.

Let me summarize it in four key areas.

First, prepare and be ready.

I remind all countries that we are calling on you to activate and scale up your emergency response mechanisms;

Communicate with your people about the risks and how they can protect themselves – this is everybody’s business;

Find, isolate, test and treat every case and trace every contact;

Protect and train your health workers.

And let’s all look out for each other, because we need each other.

There’s been so much attention on one word.

Let me give you some other words that matter much more, and that are much more actionable.

And most of all, people.

We’re in this together, to do the right things with calm and protect the citizens of the world. It’s doable.