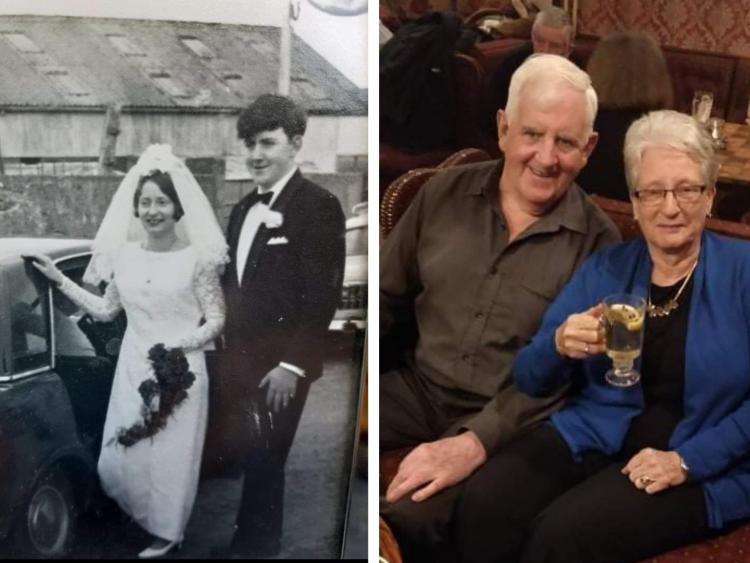 The 50th wedding anniversary celebrations for one Laois couple will be a much quieter affair than planned thanks to Covid-19 precautions.

John and Betty Brophy from Spink are following the HSE's and Government's advice and cocooning safely at home as they are both over 70 years old.

This Tuesday March 31 they will celebrate the day they got married, 50 years ago on Easter Tuesday.

The celebration was to have included a night out in the Abbeyleix Manor Hotel on April 3 to see country singer Mike Denver, organised by their son Kieran.

They were also going to have a meal followed by a shindig in Headens of Spink with plenty of music, as John and Betty love their music.

The couple have five children, John, Ray, Declan, Kieran and Eilís, along with four daughters-in law, a son-in-law and 10 grandchildren.

All were coming home to celebrate together, including Declan and his wife Mags planning to travel home all the way from Chicago. Instead the couple will toast their jubilee with a glass of wine together in their home on the hill in Spink.

Betty spoke on the phone to the Leinster Express from her home and gave her secret for a happy marriage.

"Just stick it out together. There was lots of hard work to be done on the farm, and we were blessed to have five healthy children and now ten grandchildren," she said.

They are now retired from the farm and they have been keeping themselves safe away from the pandemic helped by their family.

"John had to go to the clinic for tests, he has a heart problem and COPD, and other than that we are only going out for a walk on the road. No-one has been in the house for over two weeks. We have to be careful. The family drive into the yard and leave stuff and go," she explained.

"The worst of it is we can't see the grandchildren. They can't even come in the car because they would only want to get out. Eilís' children are only aged seven, five and two. The little lad loves John, he would run straight to him," Betty said.

They are coping fine with cocooning, which means not even any trips to the shop, just staying safely at home.

"We are getting on grand with it. We were never ones for going out. There is plenty of reading books and magazines and telly. The phone is great, we are talking to our son in Chicago on the computer. Once everyone stays well that's all that matters," she said.

They will celebrate quietly at home.

"We will have a glass of wine or champagne. When all this is over we will celebrate. Everybody is in the same boat," she said.

"They will be cocooned together on the hill and we will be virtually toasting with them from around the world to celebrate this very special occasion, with a feelings of deepest gratitude, appreciation, admiration, and love," their son Kieran told the Leinster Express.

He gave an account of his parent's courtship and wedding.

John who is from Spink met Betty Buggy from Timahoe at a dance in Ballyroan.

"In those days they frequented dance halls throughout the county and further afield whilst courting. They drove up and parked on O’Connell Street to get an engagement ring at Lawrence’s Jewellers, on O’Connell Street. When they returned home to announce their engagement, they learned that Granny (John’s mum) had been to the same jewellers to get engaged," he said.

Getting married on Easter Monday or Easter Tuesday was common at the time due to the restrictions of weddings and dances throughout Lent. Locally many other couples they knew got married on the same day.

After the wedding Betty moved to Spink and became a farmer’s wife, which was a big change from working as a clerk in Portlaoise.

Happy 50th anniversary Betty and John and enjoy your celebrations when all is well again!