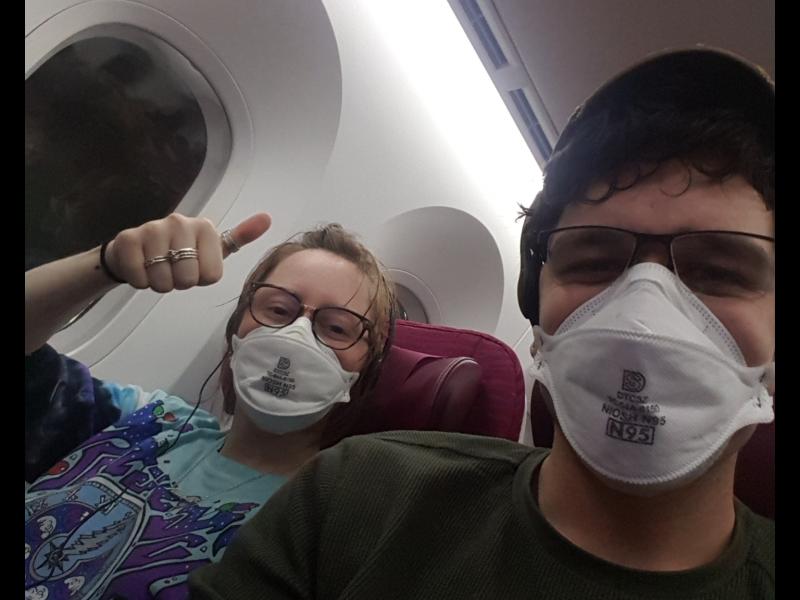 A Laois woman and her Offaly boyfriend have made it safely to Ireland after they feared they would be stranded in Melbourne after their flights were cancelled twice.

Last week, Andrea Treacy, from Rathdowney and Colm Cahill from Birr were stranded in a hostel in Melbourne, having spent nearly €5,500 on flights home only to have them cancelled.

The pair were working and travelling in Australia since last October and had been monitoring the Covid-19 situation in recent weeks. By St Patrick’s Day, the pair realised it was time to make a move home when friends messaged from all over the world to say their cities were in lockdown.

Colm said last week that the situation for Irish visa holders was "extreme”.

“Flights were being cancelled by the hour. In the past week, myself and my partner spent close to €5000 on two separate flights that were cancelled with no sign of a refund in the foreseeable future,” he said.

The pair were stranded in the hostel, having both lost their jobs, and had been in touch with the Irish Embassy and passed on their details. Colm then set up a Facebook group ‘Get us home from Australia (Ireland)’, creating polls and helping people to source information. The first airline they booked with a cost of €800 each and they relaxed, believing they would be home this week.

However, within hours, the airline cancelled the flight and said they would instead provide a travel voucher when it was “feasible”.

Colm then said a lot of panic set in and some people paid large sums for flights. With his girlfriend, Andrea, he decided to wait a little while and looked at the option of renting a house”. They then went to view houses but this was not an option because everybody was looking for a six-month lease, deposit and rent upfront and that was too expensive for the pair.

They then booked another flight at a cost of €1,600 each. However, this flight was subsequently cancelled. Colm then set up the Facebook group while also writing to the Irish Embassy, saying “with the current global situation I understand everybody is vulnerable and in need. The situation for Irish visa holders in Australia has gotten extreme.”

Thankfully, the couple secured seats on a Qatar flight from Melbourne on Monday last, March 30 after the Irish Embassy block-booked seats for Irish citizens.

According to Colm, the flights were €1,740, bringing their total spend on flights to just under €8500. However, the pair were hopefully that some of the flights would be refunded at a later day.

However, Colm was absolutely delighted to be home.

“The main thing, though is that we got back,” he enthused.

The pair are now doing their 14 days of isolation but Colm remains active on the Facebook group.

“There are still plenty of Irish in desperate situations reaching out daily for help as the situation in Australia gradually worsens with no sign of relief for visa holders.

"There’s, unfortunately, a boatload of misleading information stating otherwise. This is one of the core reasons we are still putting so much time into the maintenance of the page daily,” he said.