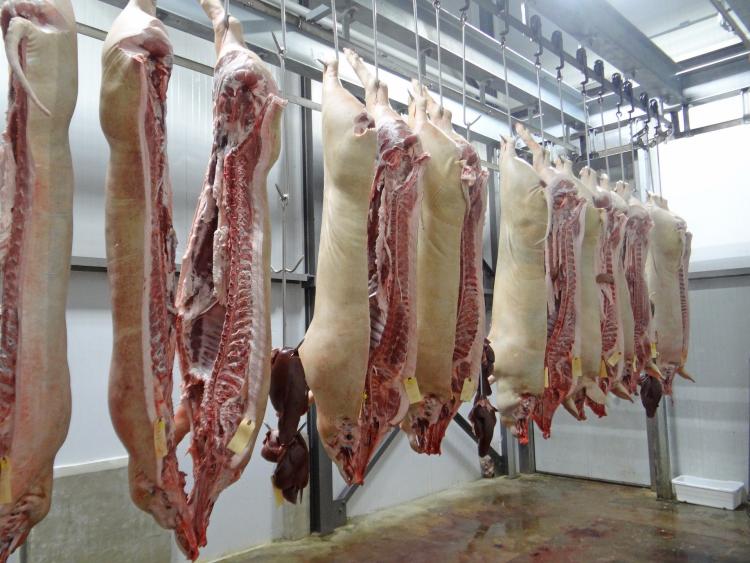 It has been claimed that the first man diagnosed with Covid-19 at the Rosderra meat plant in Roscrea became gravely ill and remains in hospital while the Department of Health has officially confirmed that five workers across Ireland have had to be admitted to critical care units.

Covid-19 has been identified as a major issue in meat plants across the country with 865 cases confirmed in at coronavirus clusters in 16 plants in recent weeks.

Confirming these figures on Friday, May 22 the Department of Health also revealed that 17 workers have been hospitalised with five in Intensive Care.

It is estimated that 200 of that total number of cases occurred in Rosderra Meats factories in Roscrea and Edenderry. Almost 70 cases were diagnosed after widespread testing of staff in Edenderry just last week.

Workers at the plants live in Laois, Offaly, Tipperary and other counties.

The issue has come before the Dáil on a number of occasions in recent week.

Laois Offaly Sinn Féin TD Brian Stanley said he is aware of a case of a man from Offaly who worked in the Rosderra plant in Roscrea who became seriously ill with coronavirus having been diagnosed in March.

"He almost lost his life. He is walking on a Zimmer frame and is still in hospital recovering. This guy was a physical worker, a hardy fella, and was hit hard by this virus." The man and his wife wish to remain anonymous.

Brian Stanley said another young factory worker in his early 20s from the Moneygall area was also taken very ill with Covid-19.

"He was on the broad of his back almost suffocating in the bed for three weeks. The weight just fell off him, he lost two stone. During the time he was locked in his room, he was contacted by work to see if he could go back because so many were out sick," Deputy Stanley claimed.

"What we have here is a mess." That was the declaration of Brian Stanley to Minister for Enterprise, Heather Humphreys and Minister for Agriculture, Michael Creed, in the Dail on Thursday evening prior to a robust exchange.

"This is a very worrying situation for the workers' health and their jobs," he added. "I've been raising this with you since Easter week and you've continuously told me that your officials in these plants are sure that all precautions are being taken. Whoever is telling you that is telling you a load of bull," the Laois-Offaly deputy exclaimed to Minister Creed.

"None of that tallies with the situation in many meat processing plants and whatever about wearing masks, some must be wearing blindfolds because it doesn't tally with what workers are telling me for the last seven weeks.

"Some factories have taken the correct action and I applaud them for that; others have not and that is the reality."

Deputy Stanley went on to explain that the first case in Rosderra in Roscrea was in a man who became "critically ill" and "almost lost his life" with Covid-19. He blasted the fact that this case arose on March 20 and "no testing was done at that time on close contacts of that worker."

"I have spoken to the families of other workers that got infected by that cluster. Testing of all workers was not done until April 24/25, a whole five weeks later. And after the tests were done, workers were sent back onto the production line without having the outcome of the test, in some cases, until the following Wednesday. Some of them turned out to be infected anf they, in turn, infected more workers."

Referring to a similar situation in Rosderra in Edenderry, Deputy Stanley said: "The first case there was early April and even when this cluster became 10 cases, all workers were not tested. When they were tested last week, they were sent back in on the production line without having the all-clear, never mind a deep clean or anything else. This is crazy stuff."

The Sinn Fein TD said families and workers are "very concerned" and added that "workers are not being consulted" about safety procedures and practices. Deputy Stanley claimed some workers were being told they can "do it or go home." He said they had to battle to get basic PPE and social distancing put in place.

Deputy Stanley also pointed to an issue in the Kildare chilling plant where he said he has confirmed that no temperature testing was taking place there and that a department [Department of Agriculture] official was even out sick with Covid-19 from that facility.

He said no HSE-led inspections were carried out at meat plants until this week. He also claimed that management in some factories "seem to know exactly when inspections are going to take place and that issue needs to be cleared up."

Deputy Stanley asked if it would be made mandatory for all workers at meat plants to have their temperature checked daily. He also asked for the number of inspections carried out for Covid-19 in meat factories. He asked that the Department officials engage with ordinary workers and not just company management.

At this point, Deputy Stanley interjected: "Why can't the HSA share those with you; you're the minister. Have you asked them?" he quipped.

He again rose to his feet in the chamber and said: "You mean to tell me we're here today seven weeks on and we don't know how many inspections in meat plants have been carried out. That's disgraceful."

Deputy Stanley said the Minister should know how many tests are carried out. She replied: "I don't need to know but what I can tell you is in the period from March 1, 2020, to Friday, May 15, 2020, the HSA work contact unit received 3,188 requests for information and 547 complaints. 53% of complaints were related to Covid-19 and 240 inspections [in a mix of workplaces] were carried out since last Monday."

Minister Creed also bit back at Stanley and said: "Deputy Stanley has categorised all of this as a mess but it is easy to be a hurler on the ditch commenting on everybody else's best endeavours."

"With every individual who contracts the virus and every industry grappling with the consequences, there is a challenge. Everybody is doing their best, including those workers deemed to be essential by this House when it approved the regulations. It should be acknowledged that these people have done fantastic work in keeping food supply chains going," the Minister added.

"My Department has had ongoing engagement with meat plants and there were 11 engagements since early March, with four involving me, and the rest involving Department officials. Since the end of February, there has been ongoing engagement with representative bodies and executives. It has always been about ensuring that in keeping the food supply chain going, the welfare of the employees is put front and centre.

"If somebody is involved in running a business and wants to keep it functioning, it is clearly in that person's interest to keep those employees safe. To argue there is some kind of conspiracy with employers to damn their workers with Covid-19 would surely be counter-intuitive."

The agriculture minister had earlier told the Dáil that since the start of this pandemic, "the protection of public health has been the Government's overriding priority."

"The Government categorised farming and food production as essential services under the Covid-19 regulations. Irish food supply chains have continued to operate effectively to ensure the security of supply of safe healthy Irish food for consumers at home and abroad," he said.

"In respect of Covid-19 and meat plants, as in all other aspects of the pandemic, we must all listen to the public health experts and adhere strictly to their recommendations. We are all part of the whole-of-government response to Covid-19 and in this instance are focused on ensuring the health and safety of all workers, including staff from my Department in meat plants. Since the start of the pandemic, my Department officials and I have had regular meetings with meat industry representatives.

"At all times we have emphasised that their priority must be safeguarding human health and following HSE guidelines at all levels of operation. Meat industry representatives have outlined to my Department the type of measures put in place in plants, including, for example, the extension of operating hours, reduced throughput rates at individual plants, the provision of additional PPE, the installation of Perspex screens, temperature checks on entry and the provision of additional facilities to support physical distancing measures. Because meat plants remained open as an essential part of the food chain, these measures were put in place in an evolving situation with new information and advice emerging on an ongoing basis."

Speaking to the Leinster Express on Friday, Deputy Brian Stanley took issue with the ministers' response to the outbreak in meat plants. Asked for his reaction to Minister Heather Humphreys saying she didn't need to know the number of inspections carried out at meat plants, Brian said: "It's outrageous. It's a complete failure and dereliction of duty. We're in the middle of a major pandemic here, we have a serious crisis in our meat industry and my reason for raising this more than six weeks ago was to protect workers' health, number one, protect jobs and to protect this industry which is important for food supply and employment."

"If a Minister thinks 878 cases of an outbreak isn't a major issue, or Minister Creed, they're completely missing the point here. This is a serious threat to the industry; it's a serious threat to the workers' health. The fact that they [Ministers Humphreys and Creed] didn't know how many HSE or HSA inspections had been carried out in meat plants is absolutely incredible."

Deputy Stanley had been informed earlier this week by way of a Parliamentary Question that there had been a mix of announced and unannounced inspections carried out. "The workers tell me that there's no mix; they're all announced," Brian commented. It is their view that management knows about inspections because they always seem to happen when there is a lower number of people on the factory floor."

He said he will continue "chipping away" at this and calling for more action from ministers and officials to ensure a safe response to the outbreak in meat plants. He wants transparency on inspections, split shifts to reduce staff levels appropriately, proper PPE and leave for workers awaiting test results. He is also calling for close contacts of confirmed cases in meat plants to be tested.