Just five Covid-19 cases were confirmed in Laois in June according to the latest official figures.

Up to date data published on in the Governments Live Covid-19 datahub shows that the total number of infections by the end of June was 265. The spread has virtually flatlined in April in Laois. By July 1 the total remained at 265.

This contrasts with May when 25 new cases were identified and April which saw a rapid rises in cases. In that month the number of infections rose from 16 on April 1 to 230 five weeks later.

Central Statistics Office figures published in the middle of June show that 15 people had died in Laois.

Just 22 cases officially declared in March. The data hub shows that there had been six cases before March 21 when county by county figures began to be published.

County by county figures are published daily by the Department of Health for the National Public Health Emergency Team (NPHET). The county breakdown refers to cases confirmed on midnight at Wednesday, July 1. The publication is always two days behind the national figure. Data was not published for June 30. More below graph. 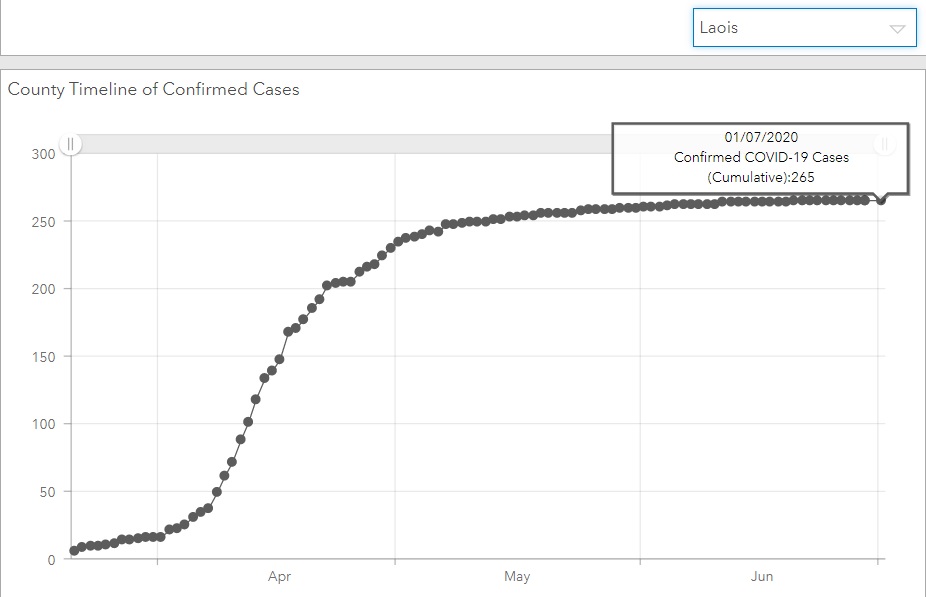 The situation in other counties is as follows.

Tipperary remains at 543 cases - no change.

Read also:  MAP SHOWS WHERE THE COVID-19 INFECTIONS WERE CONFIRMED IN LAOIS BY ELECTORAL DISTRICT

Two more people have died with Covid-19 in the past 24 hours in Ireland.

The Health Protection, Surveillance Centre data now shows an official death toll of 1,740 deaths in Ireland recorded since the first death in March.

Read also: The COVID-19 Dashboard provides up-to-date information on the key indicators of COVID-19 in the community.

Read also: How to manage stress during the Covid-19 outbreak?