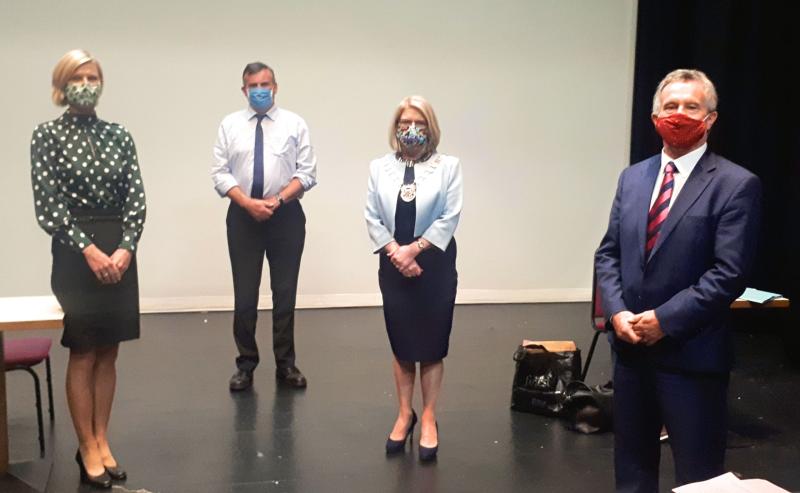 Laois people are "all terrified again" and angry over the extra restrictions placed on the county, the Laois County Council Cathaoirleach has said.

Cllr Catherine Fitzgerald addressed the emergency meeting of Laois County Council this Tuesday afternoon August 11 where councillors pleaded the case for supports for the county to recover from the partial lockdown imposed after Laois cases rose along with Kildare and Offaly.

"Why was the spike so quick? We kept our social distance, we wore our masks, we washed our hands till they were red raw. There is nothing more we can do as a community if the state does not protect us. People's mental health hasn't been mentioned. I've never heard as much anger and frustration. 27 days Laois was Covid free. We were told the key was testing, testing, testing. Testing obviously didn't take place," she said.

Many of the councillors said while they understood public health comes first, the hit on businesses has been tough.

"What are you doing to ensure this doesn't happen again?" asked Cllr Willie Aird.

Minister of State Sean Fleming said that public health comes first, and second is getting a million Irish students back to school in two weeks time.

"They have already missed six months, if they don't go back it's like telling every child you're being held back for a year.

"Another reason for the strong measures is to have economic recovery. I know it is extremely difficult, it was quick because the spike happened quickly. The one thing is testing is quick now. I was in Laois shopping centre and there was 100% compliance of people wearing masks. That is a sign that people will follow good advice," he said.

He said there will be further supports for businesses having to restart again Laois, Offaly and Kildare.

He said he has also asked government for a buffer zone for Graiguecullen and Portarlington who "straddle a county boundary".

"NEPHT is against it but I made a strong case. There's four estates in Graiguecullen that you cannot leave without crossing into Carlow, technically they can't go to the shop," he said.

Super Junior Minister Pippa Hackett told them that business supports are being looked at by government.

"Obviously the decision was one government felt they had to act on with the accumulative numbers. It should be five cases per 100,000 people. Laois has 70, Offaly has 120 and Kildare has 150. That was what raised the alarm bells. If they had left it you would see people dying very soon. That is the gravity of the situation. I under stand the emotions I feel them myself but ultimately it is about saving lives," she said.

Laois County Council has reactivated its community support phone line. A multi agency co-ordination centre has also been set up involving Laois Offaly Garda Division, Laois, Kildare and Offaly local authorities and two HSE agencies. They will give daily updates to every county councillor to pass on to communities and businesses.

The Minister for Health Stephen Donnolly made his apologies for not attending the meeting, to which representatives of the Department of Health and NEPHT had also been invited.

The Minister has however agreed to a video meeting with a delegation of Laois councillors. Agreed to take part are Cllrs Conor Bergin, Paschal McEvoy, Thomasina Connell, Ben Brennan and the Cathaoirleach Cllr Catherine Fitzgerald.