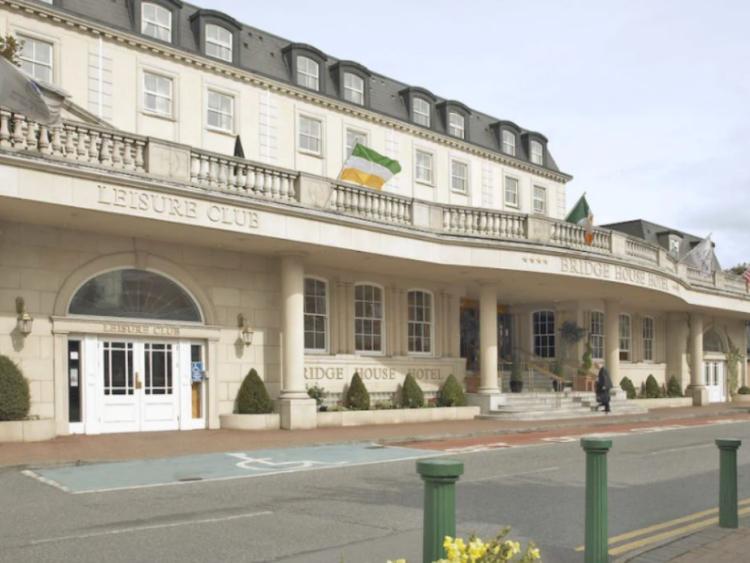 The Bridge House Hotel closed because of the outbreak

THE Covid-19 crisis intensified in Offaly in the past week with an outbreak linked to a Tullamore hotel and cases of infection in at least four schools around the county.

The Bridge House Hotel closed for 14 days from Wednesday of last week following a coronavirus cluster where up to 20 guests tested positive.

The 20 guests were among a group of 40 from a golf society group which revealed last Friday that one of its members had died in Tullamore, but said the fatality was not due to the virus.

GPs were told by a HSE public health official on Wednesday (September 16) that a “significant Covid-19 incident” had occurred in Tullamore.

Those who tested positive for Covid played golf in Esker Hills, Tullamore, and the New Forest Golf Club, Tyrrellspass.

The GPs were also told some of the guests “socialised in various places around the town of Tullamore”, including two public houses and a restaurant.

Close contacts were identified and asked to restrict their movements. An initial test was to be followed up with another after seven days.

The GPs were told the guests had been staying in the Bridge House Hotel in Tullamore.

According to the HSE official who contacted GPs in the Midlands, up to 100 staff at the hotel were to be screened for Covid-19.

Hotel guests were advised to contact their GP if they develop Covid symptoms up to September 24.

Ray Molloy, spokesman for Esker Hills Golf Club, told the Tullamore Tribune up to 14 people who were on a four-night break in Tullamore played golf at the course once during their stay.

They did not have any refreshments there and the bar in the clubhouse has remained closed.

The club has been contacted by the health authorities but unless someone is showing symptoms, there are no implications for others who played golf at Esker Hills during that period.

“What we have to do is watch ourselves if we have any symptoms. We weren't a declared contact as such,” said Mr Molloy.

According to the email from the HSE dated September 16, infection at the time was limited to the group who were staying in the hotel.

However, the email added: “If, from testing, new notifications and further history, we determine there is transmission of infection beyond this group either to staff or guests we may contact others who have eaten in any of the Bridge House restaurants or drank at the bar and ask them to contact their GP if [they] develop symptoms.”

The GPs were told this is “likely to be a significant number of people from the Tullamore community” and advised the doctors that they may get queries.

Anybody associated with the incident was asked to restrict their movements and was going to be tested for Covid-19.

In a statement released on Friday, the HSE advised anyone who was in the Bridge House between September 6 and September 17 to be “highly alert” to Covid symptoms.

Those who develop symptoms were asked to contact their GP and explain they were linked to the hotel so testing could be arranged.

They were told to reduce the number of people they are in close contact with, advice echoed by Tullamore GP Dr Declan Scanlon and Offaly TD Barry Cowen on Friday.

The HSE reminded people that the symptoms are a fever (a high temperature of 38 degrees celsius or more), any kind of a cough, shortness of breath or breathing difficulties and a loss or change to sense of smell.

The public were asked to continue to wash their hands, wear a face covering and keep a distance of two metres from others.

The HSE said its public health department was working closely together with the Bridge House Hotel for the safety of everyone.

A spokesman for the Bridge House said on Tuesday afternoon the hotel would be issuing an updated statement soon.

Announcing its temporary closure last Friday, the Bridge House said the health and safety of employees and guests is its “number one priority”.

“Since reopening we have worked tirelessly to ensure a safe environment in line with the all Government public health guidance, including from the Department of Health and the HSE.

“However, regrettably, we confirm that we have been notified by the HSE of a confirmed cluster in a group of guests who stayed at our hotel last week. We are working closely with and co-operating fully with the HSE.  All potential close contacts are being contacted by the HSE.

“All staff members are also being tested as a precautionary measure.  In the interests of health and safety, we have decided to close our hotel temporarily as a further additional measure.”

Two public houses and a restaurant were named in the HSE letter to GPs and one of the publicans, speaking on condition of anonymity, said eight of the guests, who he said were from Dublin, were in his premises.

They were seated at two separate tables and two of them had tested positive for Covid-19.

The publican said he had himself tested and the result was negative. He said he was not happy with how the matter had been communicated to him by the HSE.

This week it emerged that there had been a confirmed case of Covid-19 in a Second Year student at Tullamore College and in a pupil attending Scoil Bhride national school in Clara.

Confirmation of those cases came after families were also contacted by the HSE about Covid in two Edenderry schools, Oaklands Community College and Scoil Bhride primary school.

A letter from the HSE to parents said a risk assessment had been carried out with regard to the schools and parents of close contact children were notified separately.

Public health authorities and the Government said on Monday evening Offaly was showing “concerning trends” in the spread of the virus.

Figures from the Covid-19 Data hub show that Kildare is faring better than the other two counties in September than in August when it spent most of the month under lockdown.

While it has higher totals than Laois or Offaly, Kildare would have to record about 400 new cases in 10 days to reach its total for August.

The three counties had nearly 900 new cases in August. With 10 days left to go in September, the combined total is 294. Laois and Offaly may come closer to their totals for August when they also faced shorter restrictions than Kildare.

Elizabeth Canavan, Assistant Secretary-General, Department of the Taoiseach said on Monday: “While Dublin made a lot of headlines over the last few days, it is important to point out that the situation nationally is also a cause for concern.

“As of Friday, the rate of incidence of the virus per 100,000 population was showing increasing trends in all but six counties.

“While there has been significant focus on Dublin, the counties of Louth, Waterford, Limerick, Kildare, Leitrim, Donegal and Offaly are now all showing concerning trends.”