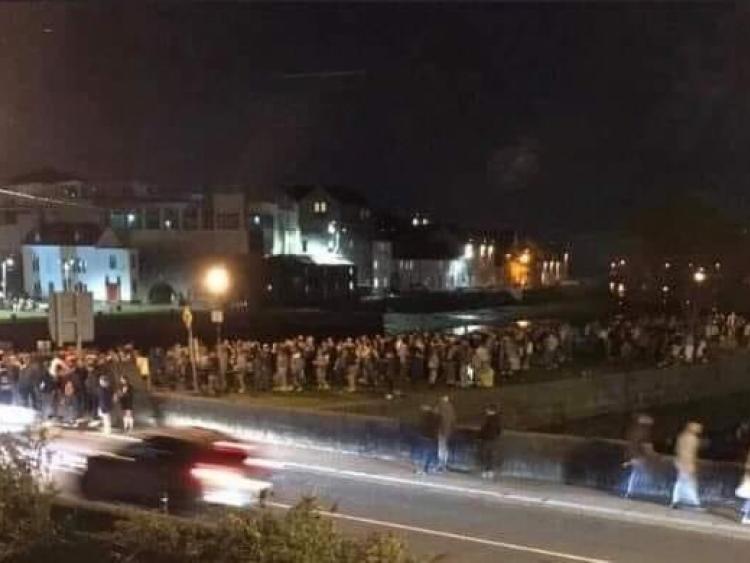 A gathering of hundreds of young people around the Spanish Arch/Shop Street area of Galway on Monday night has been condemned.

Shop Street Galway right now.....when there’s about to be an announcement tomorrow that we could be going into further lockdown....a huge slap in the face to everyone trying so hard to social distance and to health workers and to sick friends and family. pic.twitter.com/30Fk5CPbvB

The incident comes after almost 30,000 students returned to Galway for the start of the new term at NUI Galway and GMIT, although all third-level institutions have been instructed to facilitate online lectures only for the next two weeks.

Gardaí in Galway responded to a number of other incidents including reports of more than ten house parties around the city on Monday.

Every person who broke Covid restrictions in the Galway crowds tonight should be ashamed. Not only are you putting the whole city at risk but you are sacrificing the experience of the next entire college year for your class mates and yourselves. Bitta common sense and cop on. pic.twitter.com/XZaFdDuTHw

One Galway councillor, Owen Hanley of the Social Democrats called for "a bitta common sense and cop on" as he condemned the scenes.

"Every person who broke Covid restrictions in the Galway crowds tonight [MOnday] should be ashamed. Not only are you putting the whole city at risk but you are sacrificing the experience of the next entire college year for your classmates and yourselves," he said.

A Fianna Fail senator in Galway, Ollie Crowe, said: "I have sympathy for those entering college for the first time during Covid but these scenes are simply unacceptable, particularly with the recent growth in Galway cases. Have contacted Millstreet Gardai and written to NUIG President though I fear damage may be done."

"Galway is a student city and proud to be, students have always added greatly to the city. We all make mistakes, what’s important now is limiting spread. Expect public health advice will issue but seems it would be prudent for students to quarantine & not travel home this weekend," he added.

NUIG has said "the scenes involving students and other young people in some parts of Galway city on Monday night were deplorable.”

"NUI Galway has repeatedly appealed to the better judgment of our students and reminded them of their responsibilities under the student Code of Conduct.

“The university has also worked to ensure this year’s experience of university life is safe, supportive and enjoyable, despite the limitations that the pandemic places on us.”

The university met with gardaí and Galway City Council on Tuesday morning. NUIG students were warned last week that they could face expulsion for failing to follow public health guidelines and those in place at the university.