A further 11 people have contracted the coronavirus in Laois while more than 700 have been infected nationally while five more people have succumbed to the disease, according to the latest figures from the National Public Health Emergency Team (NPHET).

NPHET's daily report delivered on Tuesday, October 27 shows that the new cases confirmed in Laois bring the total number of confirmed cases in the county to 777 since late February.

A total of 720 new case numbers were confirmed across Ireland on Tuesday. However, another five people have died as reported by the Health Protection Surveillance Centre (HSPC).

There has been a total of 1,890 COVID-19 related deaths in Ireland.

As of midnight, October 25, the new cases mean there have been 58,767* officially confirmed cases since February.

The 14-day incidence for Ireland is now nearly 3 cases per 100k population. This is on the back of more than 14,... cases in the past two weeks.

The remaining 257 cases are spread across another 20 counties.

As of 2pm today 341 COVID-19 patients are hospitalised, of which 38 are in ICU. 16 additional hospitalisations in the past 24 hours.

Of the cases notified today; 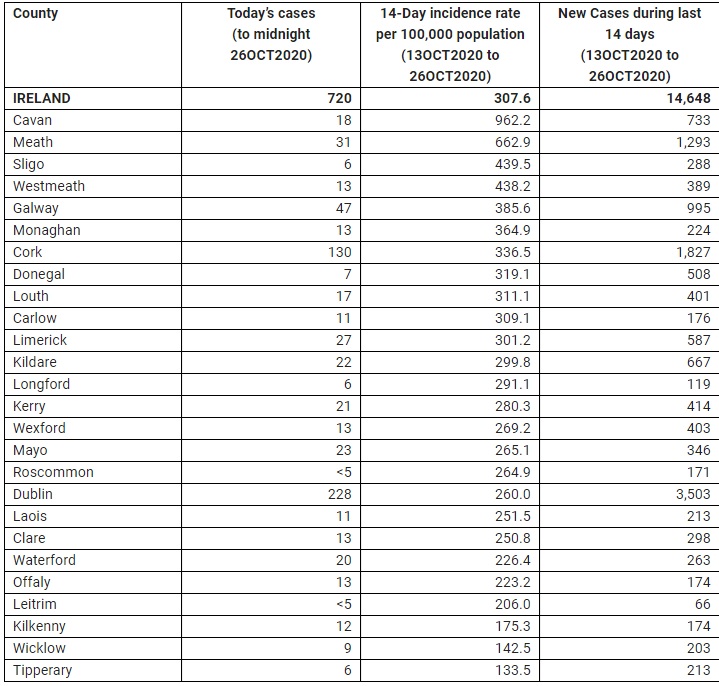 The COVID-19 Dashboard provides up-to-date information on the key indicators of COVID-19 in the community.