Dr Tony Holohan has urged the public 'drive down' Covid-19 and said young people need to be thanked for their efforts in controlling it on a day when it was confirmed that Laois had another small number of new cases but more people died nationally and the number of new cases was more nearly 600 around Ireland.

The daily update from the National Public Health Emergency Team (NPHET) shows that there have been seven new cases of Covid-19 in Laois. It brings to 857 the total number of new cases since February.

The figures also show more signs that the spread that the virus is slowing in Laois. The incidence per 100,000 has dropped to 167.7 on the back of 142 cases in the past two weeks.

There have been 126 new cases in the county since Level 5 was enforced but there were a record 355 cases in Laois in October when a number of deaths were confirmed. (county by county table at end of story).

NPHET also confirmed today that the more people have died around the country while hundreds more continue contract Covid-19 in Ireland.

The number of new cases reported by Dr Tony Holohan and NPHET reached 591 by midnight, Wednesday, November 4. There has been a total of 64,046* confirmed cases of COVID-19 in Ireland. NPHET confirmed that 28 confirmed cases were denotified.

A further three people have lost their lives according to figures from the Health Protection Surveillance Authority. This means there have been 1,933 COVID-19 related deaths in Ireland during the pandemic.

As of 2pm today 302 COVID-19 patients are hospitalised, of which 38 are in ICU. 20 additional hospitalisations in the past 24 hours.

“A second surge is taking place across Europe. Ireland and Finland are the only European countries in the EU where reductions in 14 – day incidence have been observed. All other countries are increasing.

“Level 5 efforts over the last two weeks have succeeded in further reducing community transmission and disease incidence in Ireland, however, now is not the time to be complacent. We must keep driving down this disease- we must keep going.

Professor Philip Nolan, Chair of the NPHET Irish Epidemiological Modelling Advisory Group, said the reproduction rate of the disease has dropped below a key marker.

“We estimate the reproduction number at 0.7 - 0.9. This is a testament to our collective effort to stop the spread of the virus and it is very good news. We may be doing better now but it is conditional on whether we keep it up. If we continue to use this time to drive the infection right down, we will be in a good position in four weeks time,” he said.

“While the age demographic of cases vary from the first surge back in March to this one, ICU admissions have affected people from all age groups, with the average length of stay at 17.8 days. People of all ages are potentially vulnerable to the more extreme symptoms of this disease,” she said. 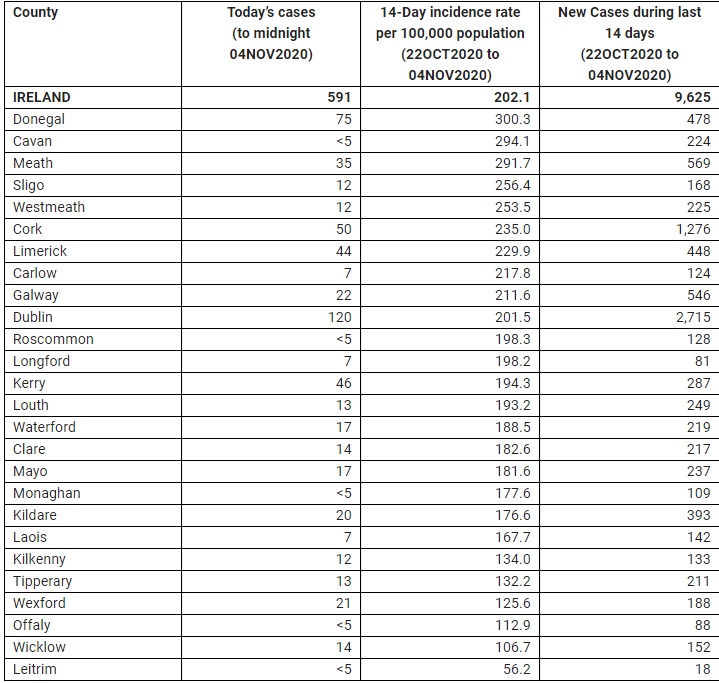